I feel a sort of kinship with people who share the same background as me, whether it’s the place I grew up, a place I visited or school that I went to. I learned about Eat, Pray, Love way before I learned that Elizabeth Gilbert and I share the same home state– New Jersey. Her latest book, The Signature of All Things, makes me even happier since it’s about science, ambition as well as thirst for knowledge, three things that I like (more so the first and last things, than the middle). 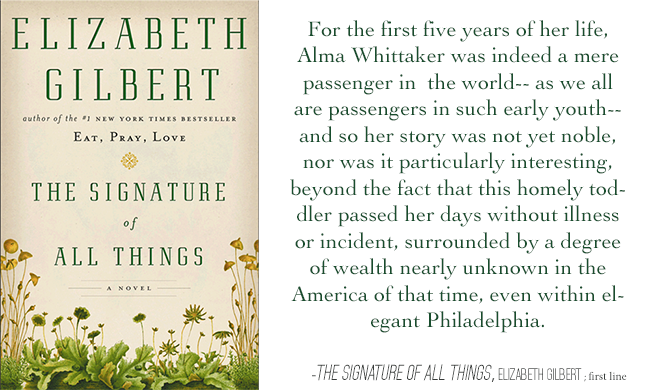 The Signature of All Things spans for most of the eighteenth and nineteenth century and is the story of Alma Whittaker, a gifted botanist. Her father, Henry Whittaker, is a poor Englishman who finds his fortune in the South American quinine business, soon becoming the richest man in Philadelphia. Alma, who’s inherited her father’s fortune as well as his mind, becomes a botanist whose research is on the brink of the theory of revolution. Alma falls in love with Ambrose Pike, a gifted artist who makes detailed paintings of orchids, and Alma finds herself in the abstract world of magic, spirit, and divine.

The Signature of All Things is the first Gilbert novel that I’ve ever picked up, which makes me a little sad (why did it take me so long?). She paints Alma Whittaker, a plain girl who loves science, so detailed and meticulously, so real that at times wanted to grab Alma and hug her. She shares Gilbert’s love of the world, so apparent is Alma’s love for the plants around her. Due to the circumstances of 19th century society, Alma can’t travel as much as the male botanists of her time can, but she still manages to observe the world around her, starting with the plants in her backyard.

Gilbert contrasts the straight science with abstract emotions, such as love, religion as well as family. Gilbert does this with precision, never drudging too long in either. The Signature of All Things has the potential to be too technical, too much nature-filled, too much botany, but it doesn’t. At the end, it’s a story about humans who are on the brink of scientific discovery as well as changing times.

What I loved about The Signature of All Things was that it was about the two worlds I love the most– science and the less abstract world, as well as the complexity of the story that doesn’t overwhelm. I’m now going to request a copy of Eat, Pray, Love.

A review copy was provided by the publisher via BEA. All opinions are my own.