In high school, the running joke between my friend and I was that we were hipsters. Of course, you can’t be a hipster if you think you’re a hipster, just as hipster music isn’t hipster if it’s mainstream and so by this logic, we actually aren’t hipsters. 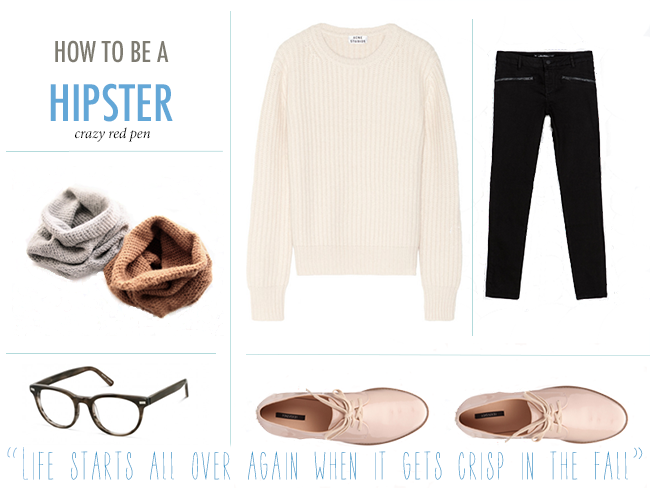 In honor of Halloween (and the fact that there’s very, very little time) to do something huge for Halloween, here are some ideas to be a hipster for Halloween.

1. It’s my fervent belief as a hipster that you can’t do anything mainstream. Dressing up for Halloween is way too mainstream.

If you’re like me, lazy a hipster, you can’t dress up for Halloween. It’s too mainstream.

2. But if you’re going to go mainstream, you’ll need your hipster glasses.

It doesn’t matter whether or not you’re actually nearsighted/farsighted. You can’t leave your house without thick, black glasses. Punch out 3-D lenses if you have to.

4. If it’s cold out, wear an oversize knit sweater (and maybe even a chunky scarf?)

No, the store had your normal size but you decided that the oversize sweater was so much cuter.

5. And lastly, say some random philosophical quotes and carry around a book.

The latter half should always happen, regardless of your hipster-state of mind. Always. Books are amazing and I personally carry around a book, whether or not I have time to read (you never know when a reading period can pop up).

P.S I do love these pieces of clothing and I wear said things regularly, but not for the aforementioned reasons (or is it?).