I’ve had Forgive Me, Leonard Peacock for a long time now but it’s only now that I had the time to sit down and write a review, while I’m waiting for the dining hall to open. Such is life. 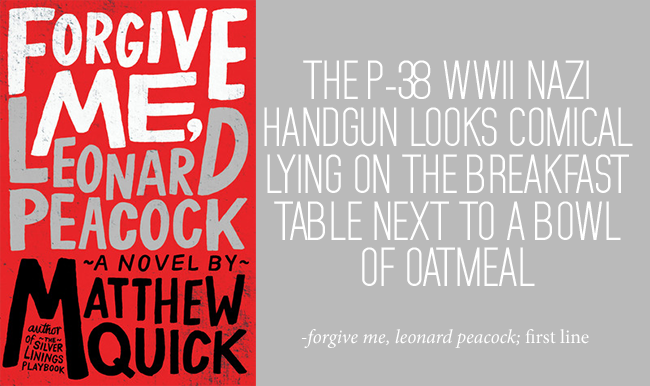 Matthew Quick is also the author of The Silver Linings Playbook, a book that I haven’t read but heard good things about the movie. Of course, I can’t make a comparison between books and their corresponding movie adaptations but if Jennifer Lawrence was in the movie version and it won an Oscar, the book can’t be all that bad, can it?

In addition to the P-38, there are four gifts, one for each of my friends. I want to say good-bye to them properly. I want to give them each something to remember me by. To let them know I really cared about them and I’m sorry I couldn’t be more than I was–that I couldn’t stick around–and that what’s going to happen today isn’t their fault.

Today is Leonard Peacock’s birthday. It is also the day he hides a gun in his backpack. Because today is the day he will kill his former best friend, and then himself, with his grandfather’s P-38 pistol.

But first he must say good-bye to the four people who matter most to him: his Humphrey Bogart–obsessed next-door neighbor, Walt; his classmate Baback, a violin virtuoso; Lauren, the Christian homeschooler he has a crush on; and Herr Silverman, who teaches the high school’s class on the Holocaust. Speaking to each in turn, Leonard slowly reveals his secrets as the hours tick by and the moment of truth approaches.

In this riveting book, acclaimed author Matthew Quick unflinchingly examines the impossible choices that must be made–and the light in us all that never goes out.

Leonard Peacock is an intelligent boy but his mother is absent from his life, both physically and mentally, causing him to feel alone in his life. Leonard’s only friend is his neighbor, an eighty-something year old man, with whom he spends his time watching Bogart films. Herr Silverman, the Holocaust teacher, is another positive influence on Leonard’s life.

Ultimately, Leonard’s confusion, anger and loneliness builds on his 18th birthday and he wants to commit suicide after saying goodbye to the people who matter the most in his life.

Leonard Peacock is suicidal but Forgive Me, Leonard Peacock isn’t at all a sad, depressing read. It’s heavy, for sure, but not sad or depressing. Quick intersperses footnotes throughout the novel, giving the reader a glimpse into Leonard’s mind, which is often times, biting and sarcastic. The footnotes give the story a lighter feel yet at times, I was bothered by how often they appeared in the story. I had to keep stopping, find the corresponding footnote, read the footnote and go back to the actual story. By the end, I started to skip footnotes.

While the footnotes were an issue, the more frustrating thing was the letters from the future. I read Forgive Me, Leonard Peacock going in, thinking that it was a contemporary novel. Instead, Forgive Me, Leonard Peacock, becomes a borderline dystopian novel (at least the world that’s portrayed in the letters from the future). While I understand that there needs to be a message of “It gets better” and that life isn’t perfect, it was a little disconcerting and disorienting. I think Quick could’ve went about it in a different way (though an epilogue is out of the question since they always seem to be either bright, sunny and happy or sad and depressing, glossing over the story).

Overall, Forgive Me, Leonard Peacock is an intriguing read, despite the fact that there were some things that took some getting used to.