It’s finally (or rather, tragically) August! Thus begins my life that is starting to speed up again. I’ll try to blog as much as I can!

Anyways, I was reading, or rather, re-reading Never Let Me Go by Kazuo Ishiguro. I had finished Haruki Murakami’s Norwegian Wood  a few weeks ago, and I wanted to read more works by Japanese authors. 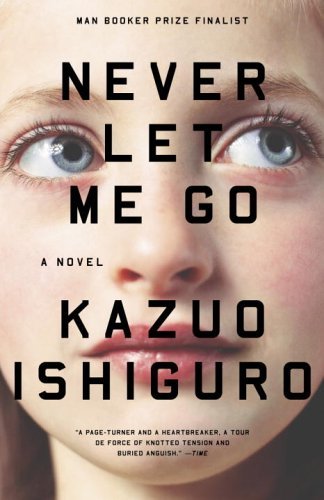 Like many book choices that I make, I first read Never Let Me Go after reading a positive review by Time  magazine about the movie and the book. After reading it, I bought the movie edition of the book (not the one pictured) last summer, when Borders closed.

I loved this book, which is why it’s weird I’m writing a review of it now.

Never Let Me Go is a soft, speculative book about life, growing up and discovering one’s destiny. The writing is not flowery, not overly laden with long figures of speech, however it still does it’s job. I finished it, blown away by the book’s deepness and the juxtaposition of that sense of profoundness with the simplicity of the writing. The writing is so, so lulling, like a lullaby. It’s a tragic novel, but readers don’t feel that tragedy with tears shedding for the main characters. Instead tears are shed at the thing that is life, and how even if there are touches of science fiction in the book, the reality that is presented by the book.

Set in England in the late 1990’s, it starts off with Kathy, a 31 year old carer, reminiscing about her childhood. She remembers her childhood at a private school, Hailsham and the times that she spent with her friends, Ruth and Tommy. Kathy says, “Driving around the country now, I still see things that will remind me of Hailsham. I might pass the corner of a misty field, or see apart of a large house in the distance as I come down the side of a valley. even a particular arrangement of poplar trees up on a hillside, and I’ll think:” Maybe that’s it! I’ve found it! This actually is Hailsham!”

As Kathy remembers her life at Hailsham, with her friends, readers are reminded of their own childhoods, playing and learning along with friends. Kathy remembers watching Tommy play soccer (football in the novel) and sharing secrets with Ruth. Readers remember similar moments in their own lives, the utter innocence and simplicity of childhood.

As childhood slips into adolescence, the friendship between the three friends are strained. Kathy recalls Ruth’s attempts into popularity and romantic relationships. As the three friends grow apart, Kathy complacently watches, something she will do until the very end.

The feeling of being on the brink of childhood and adulthood is a difficult stage to put into words. There’s the angst, the need to be understood, the realization of how big this world is, and other things. However, Ishiguro captures the stage completely, through Kathy’s anecdotes about her youth.

As the characters grow up (or as memories become more recent memories), childhood ideals are broken as the characters learn more about the world. This is all told in in the form of memories, without being repetitive or cliche.

I mentioned earlier that there’s tinges of science fiction in this book, which makes the book so much more profound. As the characters later realize, their childhood was spent trying to defy a certain stereotype and the people that Ruth, Kathy and Tommy had idealized images of aren’t the people that they thought they were.

Never Let Me Go was a Man Booker prize finalist, and it’s easy to see why. Time magazine called it the “best novel of the decade” and it truly is. The book is so quiet that it’s absolutely stunning. I’ve reached the point where I get really really excited about a book and my words turn into unknown, badly written slush of English so I will stop here.

But really, if you haven’t read Never Let Me Go, you should! Don’t just watch the movie!