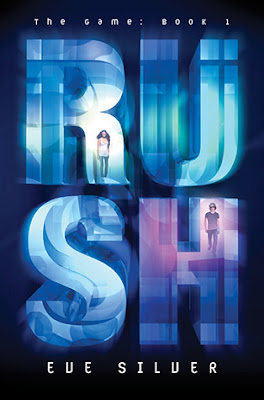 So what’s the game now? This, or the life I used to know?

When Miki Jones is pulled from her life, pulled through time and space into some kind of game—her carefully controlled life spirals into chaos. In the game, she and a team of other teens are sent on missions to eliminate the Drau, terrifying and beautiful alien creatures. There are no practice runs, no training, and no way out. Miki has only the guidance of secretive but maddeningly attractive team leader Jackson Tate, who says the game isn’t really a game, that what Miki and her new teammates do now determines their survival, and the survival of every other person on this planet. She laughs. He doesn’t. And then the game takes a deadly and terrifying turn. [summary from Goodreads]

Review:
It really pains me to say this but  Rush fell short of my expectations. It had a promise– a bad-ass kendo-sword welding part-Asian (yay for POC!) protagonist in an alternate reality/video-game situation but it fell short.
Honestly, with a POC [person of color] character, I was hoping that there would be more about her background, especially since POC’s are so rare in fiction. Instead, there are random smatterings of kendo techniques and mentions of her Japanese heritage. It sometimes seemed more that Miki was Japanese partially to justify her kendo sword-wielding (which isn’t really an excuse at all).
At times, the world building of Rush confused me and made me scratch my head. The lineage for one of the characters had the enemy’s but then the story said that the character’s ancestors were fighting the enemies so they never mixed… Confusion.

The romance… Jackson Tate was flat. He’s mysterious, protective, and… cliche. It was maddening. I didn’t know who he was, other than his non-descriptive answers that he gives Miki. He’s an attractive cardboard of a person, which is a shame. Similarly, I didn’t understand Luka, Miki’s teammate and classmate. At times, he seems like he’s going to be in a love-triangle with Miki and then he’s mysteriously fades out of the plot and then… comes back in, feelings gone with no explanation. Er, what?
For people who like video games or alternate reality scenarios, Rush provides entertainment. But it’s only really entertainment, nothing more. I was entertained by Rush, but considering Rush is a series, I don’t think I’m willing to follow up with the series.

Review copy provided by the publisher, through Epic Reads