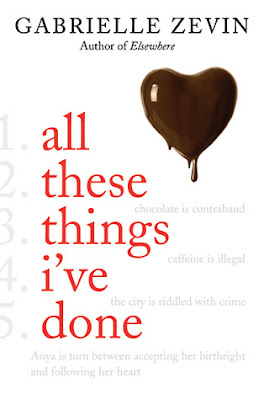 Synopsis: In 2083, chocolate and coffee are illegal, paper is hard to find, water is carefully rationed, and New York City is rife with crime and poverty. And yet, for Anya Balanchine, the sixteen-year-old daughter of the city’s most notorious (and dead) crime boss, life is fairly routine. It consists of going to school, taking care of her siblings and her dying grandmother, trying to avoid falling in love with the new assistant D.A.’s son, and avoiding her loser ex-boyfriend. That is until her ex is accidentally poisoned by the chocolate her family manufactures and the police think she’s to blame. Suddenly, Anya finds herself thrust unwillingly into the spotlight–at school, in the news, and most importantly, within her mafia family.

Engrossing and suspenseful, All These Things I’ve Done is an utterly unique, unputdownable read that blends both the familiar and the fantastic. [from Goodreads]

Review:
When I picked up All These Things I’ve Done by Gabrielle Zevin, I was reminded of how much I loved Gabrielle Zevin’s novels. I first read Memoirs of a Teenage Amnesiac five years ago* and I loved it. Then, on a whim (and partially it was on a summer reading list for class that I didn’t take) I read Elsewhere, which Zevin is known for.

All These Things I’ve Done is satisfying because it’s a futuristic story that’s actually about people, not half about the world they occupy. (Does that make sense? I hope it does.) Too much time is spent on world building and sometimes, I can care less that there are flying cars if the characters are flat. Anya has things that she values, her family, her friends and school and her flaws. She sometimes has issues reconciling her values and what she wants to do. Even as her relationship with Win develops, Anya is neither angsty or emotional, which is doubly satisfying.

Plus, there are some nice quotes, which is always nice. Here’s my particular favorite:

“It’s not tragic,” I assured her. This is nothing. Tragedy is when someone ends up dead. Everything else is just a bump in the road.” For the record, that was something Daddy used to say, but I’m sure Shakespeare would have agreed, too.”

Despite all my love for All These Things I’ve Done, I’m not quite sure I’d want to read the sequel. I read the book thinking it was a stand-alone up until I looked the book up on Goodreads. All These Things I’ve Done is great as a stand-alone, but as a first novel in a series? I don’t know and I don’t think I want to know what comes after. For me, the Anya’s story is complete and I think I’m satisfied with leaving it that way.

P.S I think the cover that I used may not be the cover that is currently on All These Things I’ve Done in stores since there are two covers on Goodreads.