In the new adult section of my library, I had found a book with the words “A Newly Discovered Novel” across the cover. The title was Clair de Lune and the old Twilight fan inside me (I liked Twilight when there was only one book out.) squealed in joy. “Clair de Lune” is piece of classical music that’s terribly calming and also the piece that Edward played for Bella. Although the Twilight fan inside me had been dormant for quite some time, I still found myself picking Clair de Lune up. 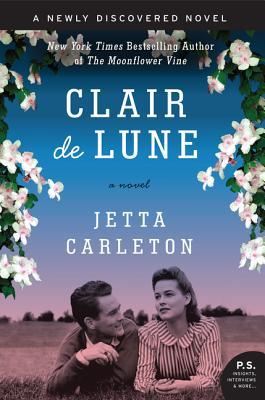 The book has nothing to do with Twilight and the only connection with it is the piano piece, “Clair de Lune” by Debussy. Set in 1941, the brink of America’s entry into World War II, Clair de Lune tells the coming of age story of Allen Liles, a young teacher in a small town in Missouri. Allen Liles is a naive young woman at the beginning of the story; she has no ambitions and no dreams and is a firm believer in the promise of the president who says that no American will be sent overseas. Through her friendship with George and Toby, Allen discovers herself and the world around her.
Jetta Carleton, the author of Clair de Lune, captures the atmosphere of pre-war America, the happiness of people and oblivion of the world around them, so brilliantly in simple prose. I was immediately pulled into the small quaint town where Clair de Lune is set. It’s a town where everyone knows each other, where worldliness is not in abundance, and where generations after generations stay.
The novel starts,
“Allen Liles is a fictional character. I made her up. Her story is made up too. But not all of it. Part of it’s mine, handed on to her, altered to fit.
It’s an old story. You’ve heard it before, any number of times. But I wanted to tell it again, as it happened in a time and a place where something existed that, nowadays, it seems to me, is in short supply: innocence.
Innocence, of course, can lead to error, and error led to the expulsion from Eden. Or so it is generally considered as far as we are told it was the end neither of Eden nor of the garden. It was the end only of the sojourn there of its first inhabitants. Evicted for the error of their ways, they were forbidden to return. Angels and a flaming sword were set to guard it at the east.”
What the narrator says is true, it’s an old story that readers have heard before numerous times. When stripped to its core, Clair de Lune is a story about coming of age, discovering yourself and the world around you. It’s the setting that Carleton weaves and the characters that she creates that are new. A young woman who dreams of New York but works in small Missouri town. Perhaps that’s not really new either, but it’s the way that Carleton writes it and the way that she presents it that captures the reader’s attention.
Another thing that the narrator mentions is true- that these days, innocence seems to be in short supply. The setting of the book is pre-US’s entrance into World War Two, where the war in Europe was far away and probably wouldn’t touch the lives of the townspeople. People worried about their own lives-who they would marry, where they would live, and what they would do in their lives. It’s a place that hasn’t known war, a quaint place tucked near the Ozark Mountains. In our lives today, we’ve known war and anguish from a young age. The 9-11 attack, the War on Terror, Afghanistan, the revolutions in the Middle East… Idealism is also at full force in Clair de Lune, where people dream of wonderful futures.
Despite the fact that Clair de Lune was written long before my own time, the book is still relatable today. The book, with its tones of innocence, idealism, and childhood, made me nostalgic for simpler times. We can’t go back in time, but we can read Clair de Lune.