I actually bought Where We Belong by Emily Giffin over winter break and read it soon after, but I kept forgetting to blog about it until now. 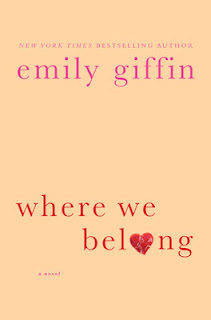 Where We Belongfollows the story of Marian Caldwell, a thirty-six year old television producer in New York and an eighteen year old girl, Kirby Rose, someone from Marian’s past that she thought was long behind her. Kirby turns up at Marian’s doorstep and Marian’s forced to remember memories of young high school love. For Kirby, her view of adulthood and her future is going to change.
The first lines of Where We Belong are:

“I know what they say about secrets. I’ve heard it all. That they can haunt and govern you. That they can poison relationships and divide families. That in the end, only the truth will set you free.  Maybe that’s the case for some people and some secrets. But I truly believed I was the exception to such portents, and never once breathed the smallest mention of my nearly two-decade-long secret to anyone.”

Overall, the book follows this arc—the secret haunting both of the main characters, dividing families and relationships in the process, only  to have the truth setting them free. Maybe it’s just me but the perfectness of everything, even the messes were neat and had happy endings, annoyed me. Giffin is a good writer, painting images and capturing the voice of an eighteen-year-old well (except for the part where another eighteen year old character mentions wearing Spanx. That I can’t believe) but something about Where We Belong left me feeling empty.
It’s not that Where We Belong doesn’t have a happy ending, it does but that’s probably what made Where We Belong  a little disappointing. I had a feeling that everyone was going to get their happy ending so at times, reading Where We Belong felt like I was being dragged along for a boring ride.
Where We Belong is the only novel by Giffin that I’ve read and after some research, it seems that her other novels seem to follow a similar plot—broken relationships and (presumably) happy endings. In that sense, Where We Belong is a similar novel and ultimately, I’m not quite sure I’d want to read Where We Belong a second time (it’s more of a quick, summer read than anything.)