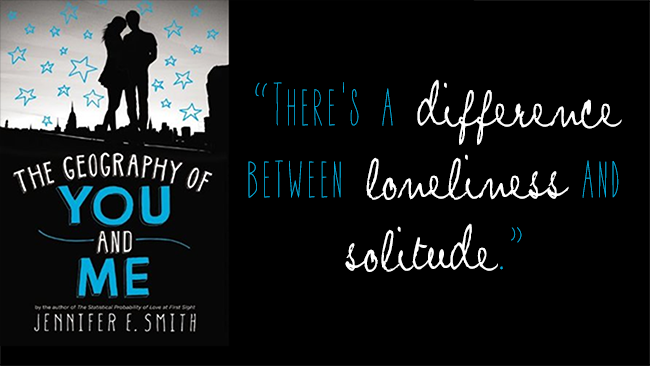 Synopsis: Lucy lives on the twenty-fourth floor. Owen lives in the basement. It’s fitting, then, that they meet in the middle — stuck between two floors of a New York City apartment building, on an elevator rendered useless by a citywide blackout. After they’re rescued, Lucy and Owen spend the night wandering the darkened streets and marveling at the rare appearance of stars above Manhattan. But once the power is back, so is reality. Lucy soon moves abroad with her parents, while Owen heads out west with his father.

The brief time they spend together leaves a mark. And as their lives take them to Edinburgh and to San Francisco, to Prague and to Portland, Lucy and Owen stay in touch through postcards, occasional e-mails, and phone calls. But can they — despite the odds — find a way to reunite?

Smartly observed and wonderfully romantic, Jennifer E. Smith’s new novel shows that the center of the world isn’t necessarily a place. Sometimes, it can be a person.

After a moment, she rose to her feet, too, and without a word, without even looking at each other, they stood there like that, shoulder to shoulder, like a couple of astronauts at the end of a long journey, waiting for the doors to open so they could step out into a dazzling new world.

I have too much wanderlust and not enough time (or resources) to explore places that I want to go so traveling through books is the next best thing. The Geography of You and Me is set in New York, San Francisco, London (for a little bit) and Edinburgh so it seemed like a perfect fit for me. However, it wasn’t really. I normally like cutesy romance stuff but The Geography of You and Me just wasn’t it for me.


Lucy and Owen meet in an elevator during a blackout in NYC and they have a grand old time together when they’re rescued out of the elevator. However, soon Owen goes on a cross-country trip and Lucy moves to Edinburgh because of her dad’s job. They promise to keep in contact, mostly through postcards of their adventures.

I originally thought it was the long-distance relationship that bothered me, but then I realized that Smith’s previous work, This Is What Happy Looks Like, had it and I was fine with it. The reason then lies in the fact that I couldn’t really believe in Lucy and Owen’s relationship. I wasn’t emotionally invested in the relationship. Lucy and Owen have their own problems– Lucy is distant from her family while Owen is struggling to come to terms with his mother’s death and so is his father and it was interesting to see how each character dealt with his/her problems. However, this did not make me a supporter of the Lucy x Owen ship. No sirree.

Lucy sends Owen occasional emails, which Owen chooses not to respond to. Instead, Owen sends postcards, from his adventures as he finds his way across the country. Their lives go on, with both of them dating people, whom I liked, but both Lucy and Owen can’t stop thinking about each other. I don’t have that much of a problem with this, except they really only met for one night and shared a kiss and now they can’t stop thinking about each other.

Then they somehow find a way to meet each other in San Francisco (and lie to their significant others about the fact) and the meeting is rather chilly. But then somehow after the San Fran trip they finally figure out how to communicate via email and they realize their attraction to each other.

I liked Jennifer E. Smith’s other works but I wasn’t a fan of The Geography of You and Me. I liked the scenery (yay NY, San Francisco, London and Edinburgh (I really want to see the last two cities sometime)) but I had a hard time connecting to the romance. Maybe I’ll connect with Jennifer E. Smith’s next work.

Book Reviewfiction, little brown and company, YA, YA novel