It’s been a while since I received the ARC for Jeff Backhaus’ debut novel, Hikikomori and the Rental Sister (January 8th, 2013, Algonquin Books) and I’ve only found the time to review it now. I wish I read it earlier since it’s simply breathtaking in its delicacy and prose. 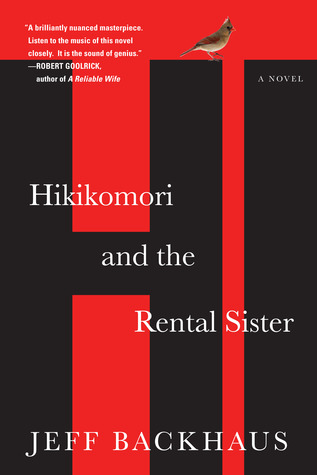 It tells the story of Thomas Tessler, a man who has essentially been a shut-in for the past three years since the death of his son. He occasionally comes out of his room and into the world in the wee hours of morning, when the sun is barely out, to the local grocery store to buy some food. He is a hikikomori.
At her wit’s end, Silke, Thomas’s wife decides to hire Megumi, a young woman who understands the hikikomori  phenomenon to help lure Thomas out, back into the world.
Told from two perspectives, Thomas’s and a third person narrator’s, Hikikomori and the Rental Sister is a soft, finely attuned novel about overcoming tragedy to find the beauty in life again. The writing is beautiful too, as evidenced by this quote:

“These cups are over one hundred years old,” Megumi says. Foreigners never understand the significance, but she says it anyway. It’s not that the age itself is important or that one hundred years is particularly old, but that for one hundred years people have been sitting across from each other drinking tea out of these same cups, a long string of moments that have come and gone never to return, and in that whole time the only thing that hasn’t changed is the cups.

Backhaus’ writing is sparse, very minimalistic, rarely flowery and it’s the simplicity of everything that increases the impact of the story. The story is a very simple one- the story of how a woman helps a shut-in man discover the world again, devoid of overly complex plots and story lines, but Backhaus manages to lead the reader onto such an emotional ride. At times, I felt like I wanted to cry, such was the genius of Backhaus’ writing.
The ending was fitting and despite the fact that I didn’t like it originally, I soon saw that it was the perfect ending. The way it ended (I won’t spoil it for you here) made such an impact. It was so… beautiful.
The way that it portrayed Asian society, whether Korean (Megumi is half Korean and half Japanese) or Japanese was pitch perfect. Megumi  often says that she has a  hard time finding the English equivalent for a Japanese term but through Backhaus’ delicate sketch, the Asian society comes alive. It’s hard for me to describe it but somehow Hikikomori and the Rental Sister captured it. There are certain quirks that Western authors sometimes miss but Backhaus got it. He even brought in the atmosphere (here is where I struggle for words. It’s not because I’m Asian but because it’s just a feeling that’s hard to form into words.)
Overall, I loved Hikikomoriand the Rental Sister which was so simple yet so deep. These kinds of novels are my favorite and I liked Hikikomori and the Rental Sister even more because it captured that Asian essence.

P.S It wasn’t until when I sat down to write the review for this novel that I realized how genius the cover was. Hikikomori is a person who shuts themselves away from the world and by taking the first two letters of the word, you get the word “Hi”, which means that the person isn’t  shutting themselves  off.  The designers at Algonquin, you guys are geniuses!


Review copy provided by the publisher