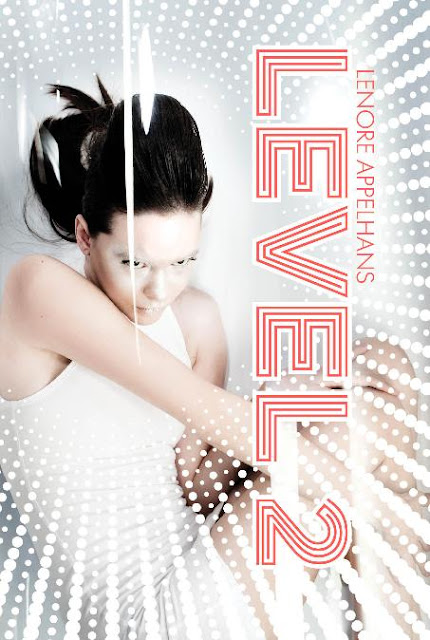 Level 2 (Simon and Schuster BFYR, pub date: January 15th, 2013) is Lenore’s debut YA novel. It tells the story of Felicia Ward, a girl who has recently died from a tragic car accident. She finds herself trapped in an in-between place called Level 2 (from which the novel gets its name) and she’s limited to watch memories from her life and other’s.
However, everything changes when Julian, an acquaintance from Felicia’s life, reappears in Felicia’s chamber on Level 2. He lures her into joining a rebellion against the Morati, the angels in charge of Level 2. The Morati haven’t been acting as guides for the souls instead they keep the souls in Level 2. Julian convinced Felicia to join the cause, telling her that he knows where Neil, Felicia’s boyfriend, is.
Interspersed into the story are Felicia’s memories, which surprisingly, fit seamlessly into the story. The constant flashbacks reveal Felicia’s past- her multicultural upbringing due to her parent’s career as Foreign Service  officers and her fall from grace-leading to her subsequent return to Ohio, where Felicia’s grandmother lives. It’s in Ohio that Felicia returns to a normal suburban high school life and where she meets her boyfriend, Neil. At times, the flashbacks seem a tad overbearing, spanning multiple pages and I want to know what’s happening on Level 2, not the past.  However, the flashbacks do reveal what kind of person Felicia was and gives way to the changes that she undergoes to fight against the Morati.
Level 2 seems like a simple story about a girl who’s tasked with the job of fighting against evil in an in-between place but it’s far more complex than that. It tells the story of a girl who wanted acceptance from her parents, normalcy and a girl who discovers what she’s capable of. Readers find out about Felicia’s adventures in Level 2 but also her past. While the two perspectives mash together well, I still couldn’t figure out what happened in Felicia’s past in Nairobi. Since Level 2  is the first in a series, I’m hoping that the haze will clear up in the upcoming novels.
Overall, Level 2 was a enjoyable quick read that was definitely different than the novels that I’ve read. It was a fresh story about a girl finding herself and it offered a lot of insight on what it’s like to grow up in many places before high school graduation.
Lenore was nice enough to find some time in her busy schedule to fit a quick interview, which is below:

1. Was Felicia’s cosmopolitan upbringing inspired by your own childhood?

In a way, yes. Due to my father’s job in the US Air Force, we moved around a lot, so I could definitely relate to Felicia’s sense of not really belonging anywhere. Felicia’s mother is a Foreign Service Officer and works at the US consulate in Frankfurt, Germany (where I live now). I have a bunch of friends who are FSOs and I even took the test myself a few times back in college. I needed Felicia to have an upbringing where she would have traveled a lot before her 18th birthday and the Foreign Service fit my idea of Felicia’s life perfectly.

2. What was it like to get your dream lit agent, Stephen Barbara, before you finished the manuscript for Level Two?

It was one of the most magical and surreal moments of my life when Stephen responded to the partial I submitted saying he loved it and knew exactly which editors would love it too. He’s had some amazing editorial suggestions too. I am thrilled to be represented by him.

3. You mentioned in earlier interviews that you’ve always imagined yourself to have a job related to writing. What made you say “I want to be a published author?”

To be honest, I never dared to say that. I studied journalism and worked in advertising for years, so I was right about the writing related job. But even up to the very moment where we accepted the offer from S&S, I simply  couldn’t imagine putting my name together with the words “published author”.

But despite that, I wrote a book anyway. The German Lottery has a slogan I love: “Wer nicht spielt hat schon verloren.” It translates to “He who doesn’t play has already lost.” I think that philosophy can be applied to all areas of life.

4. What makes Level Two stand out from the YA genre?

I’ve read hundreds of YA novels over the past few years and reviewed them on my blog, so I have a good idea of what’s out there. My goal with Level 2 was not only to write the kind of high concept book that I enjoy but to also breathe some fresh life into the dystopian thriller genre. As it turns
out, Level 2 is actually not all that dystopian, but so many early reviews have praised it for its originality (that or have called it “weird in the best possible way”) that I can say with authority that it’s not like anything you have ever read before.

I’m working on another high concept novel as well as on a few picture book ideas with my husband (illustrator Daniel Jennewein). Our first picture book together, Chick-o-Saurus Rex, comes out in July 2013 and it’s so totally different in scope and tone than Level 2. It’s fun to change gears once in a while!

Thank you Lenore for letting me interview you! Level 2 comes out on January 15th.

Book Reviewinterview, lenore appelhans, simon and schuster, YA, YA novel