I picked up a copy of Sinner at BEA earlier this summer and read it all mostly in one go. It’s enjoyable, even if it’s mostly a companion book of sorts to the Shiver trilogy, which I haven’t read. 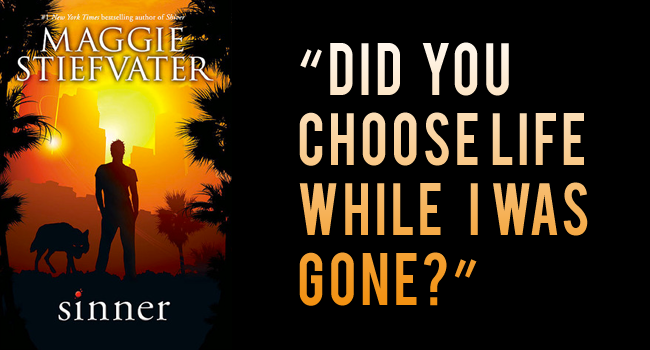 Stiefvater writes in the author’s note at the beginning of the story:

“As I wrote the hot-cold relationship of two people who took turns being the sinner and the sin, I puzzled out how a place like L.A could both destroy a person and build them into something impossible and new… It’s also despite the shape-shifting, the truest novel I’ve written. I hope that those who don’t need the truth in it will only see the werewolf and I hope that those who do need the truth will see only the human.”

When I first read these lines, I couldn’t take it seriously but in many ways it’s true. Sinner is about two characters who aren’t perfect and are incredibly flawed yet still manage to find satisfaction and happiness. Does that mean that I need to see the truth? Haha, maybe.

Isabel Culpeper is a cynic– she’s gone through too many hardships and see too much negative things. She lives with her mother, aunt and cousin in a dysfunctional family situation. She has a cynical view towards love, after seeing it fail so many times, both in her mom’s relationships as well as her aunt’s. Cole St. Clair is a returning rock star and they meet up again in L.A.

For the most part, Sinner is an interesting and enjoyable read and I passed a chunk of my time reading it. I liked reading about their relationships and how the characters each were able to discover who they were, chipping away at their harshness. I liked how Isabel wanted to be independent and be her own person, although the choices she was making was pushing people who cared away from her.

What I liked the most about Sinner was that despite having paranormal elements such as werewolves, it reads like a contemporary fiction novel. Yet, this brings me to my minor reservation, much like Just One Day held me back a little. Isabel Culpeper is set on becoming a doctor and on the days when she’s not working at a boutique, she’s taking CNA classes so that she can get into a good pre-med program, which is fine, except pre-med programs don’t really exist in the US. A lot of people take CNA classes to add to their med-school resume when they apply, though.

Book Reviewscholastic, YA, YA novel