It’s no secret that I have a huge fascination with Europe and I relish novels that are set in Europe so when I read the premise for Marie Antoinette, Serial Killer, I have to admit, I was interested at the word “Paris”. 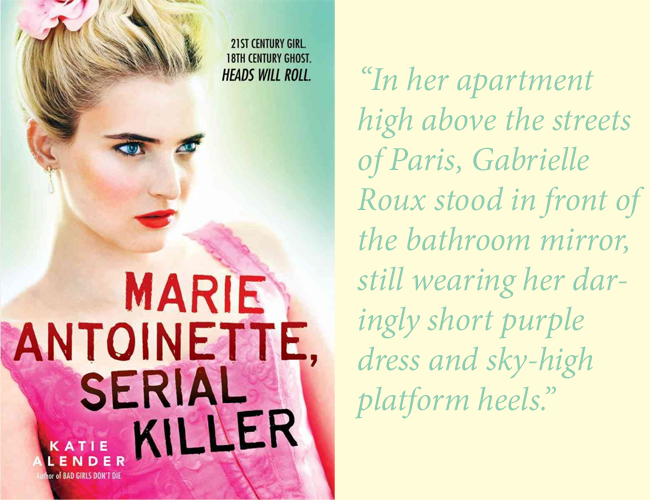 Sadly, that’s one of the few things that kept me motivated throughout the novel. Paris. The backdrop of the Paris was enough to keep me going, past the flat characters and past the annoying friends that Colette, the main character has.
Colette, a junior at a private high school, is presented with the opportunity to go to Paris with her French class and she immediately goes. When people start losing their heads, quite literally, she knows something’s up. She keeps seeing a blond woman dressed in a ball gown who looks remarkably like Marie Antoinette at the scenes of the crime and with the help of a boy, she tries to get to the bottom of things.
I liked that Colette had problems but her problems seemed like props, there for show at the beginning of the novel and not really a part of her, carried throughout the novel. Her parents are recently divorced, her mother’s working at the local mall to make ends meet and her father’s living in New York. Colette has some financial problems as well as problems at home, but she chooses to keep everything a secret from her wealthy friends.
I can understand Colette’s decision, a little, but what I cannot understand is Colette’s decision to stick with her friends, who seem like little flat cutouts of the stereotypical rich girls who live in their own bubbles, and Colette’s willingness to play along. For all of Colette’s thoughts about her friends, she still sticks with them and agrees with them. Sometimes I think Colette’s real problem isn’t with her friends themselves, but with herself, that she isn’t rich enough. However, it’s not like her friends are good friends; they really aren’t. They’re pretentious, snobby, distant and if Colette was in some sort of trouble, are dubious to show up and help.  This whole storyline lasts for too long in the book and when it finally ends, it’s a little too late.
The romance was eh. Jules, the hoodie-wearing French nerdy tour guide, was obvious as was his infatuation with Colette. Alas, he did have some redeeming qualities (literally).
Overall, Marie Antoinette, Serial Killer was a quick, light read that annoyed me but it didhave Paris. Read it if you’re looking for something quick and easy or looking for a Paris read but if you’re looking for a book that has original characters, look elsewhere.

Book Reviewfiction, scholastic, YA, YA novel