I, for one, abhor early mornings. I get up only if I have to and this morning was one of those days. I went to bed early last night and there was a mound of work that I had to get done so I got up early. I started to feel sick after a finishing my work (impeccable timing) so I crawled back into bed and napped, dreaming of molecular clocks (I should stop feeling stressed out). 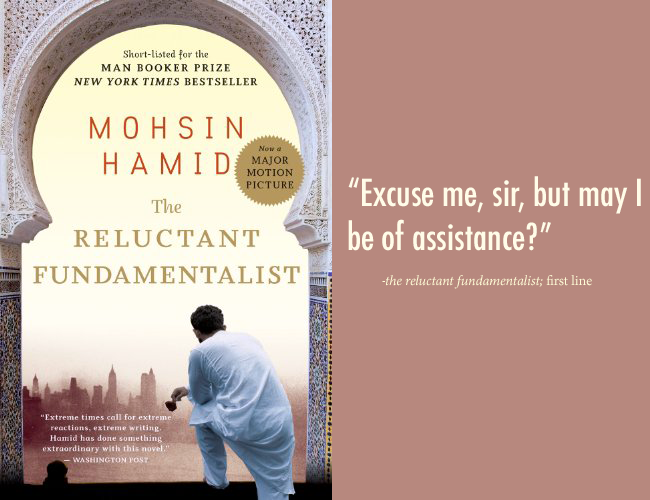 Waking up early takes control and willpower, two things I occasionally have. However, Changez in Mohsin Hamid’s novel, The Reluctant Fundamentalist has a lot of both, as he goes from a Pakistani childhood to top of his class at Princeton University, eventually working for a top-notch valuation firm in New York. He seems to have everything, an Ivy League education, a beautiful girlfriend named Erica, and a stable job, yet the events of September 11th, threatens to change everything and his perception of America.

The Reluctant Fundamentalist is a slim novel yet it packs a punch. It’s ambiguous, restrained and raw but at the same time, so clear. Changez lives with the fundamentals, living his life to a plan. He’s going to get into Princeton, work hard to be at the top of his class, then get a job with Underwood Samson, an elite company, where he’s again at the top of his firm. In the process, he gets a girlfriend but when he has everything, he’s not happy. What is success? For Changez, it’s  obviously not what he has. He’s disillusioned with everything and the events of 9/11 only serve to exacerbate his disillusionment.

One of the most obvious metaphors in the novel is use of both Erica and Underwood Samson for America. When Changez’s relationship with both start to go downhill, so is the country itself, especially after 9/11.

Similarly, Changez’s relationship with Erica reminded me heavily of Norwegian Wood. Erica is a tragic character, unable to let go of her ex-boyfriend, who died of cancer, but Changez still pushes the relationship.

At the very end, it’s unclear who the reluctant fundamentalist, whose referred to in the title, really is, and Changez’s ultimate fate, but somehow, that’s okay.