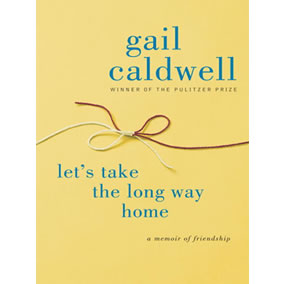 I’m glad that I did because the novel is just so well-written, not becoming melodramatic nor heavy. Let’s Take the Long Way Home is a “memoir of friendship” between Gail Caldwell and Caroline Knapp, author of Drinking: A Love Story. Knapp died of cancer and Let’s Take the Long Way Home  is the story of both of them and how Caldwell came to terms with Knapp’s death.
The novel starts out with a brief one page prologue of sorts that begins with:

“It’s an old, old story: I had a friend and we shared everything, and then she died and so we shared that too… For years we had played he easy, daily game of catch that intimate connection implies. One ball, two gloves, equal joy in the throw and the return. Now I was in the field without her: one glove, no game. Grief is what tells you who you are alone.”

Even from the first page, I knew Let’s Take the Long Way Home  was going to be good.
The novel is written through anecdotes of Caldwell and Knapp’s friendship- their initial meeting at a book party, Caldwell an editor and Knapp, an author, their bonding over their dogs, their shared love for books, and walks, from which the novel takes its name. Although the novel seems like it would be primarily about Knapp, it reveals as much about Caldwell as it is about Knapp. When Caldwell writes about Knapp’s former alcohol addiction, Caldwell flawlessly transitions into her own struggles with alcohol.
It’s partially due to the flawless transitions and Caldwell’s eloquence (“The dailiness of our alliance was both muted and essential: We were the lattice that made room for the rose.”) that makes Let’s Take the Long Way Home such an enjoyable read. It’s a coming of age story of sorts as two middle aged women discover the pleasures in life and friendship.  While grief novels are quite bleak and melancholy, Let’s Take the Long Way Home isn’t. She write in layers, showing readers the friendship she had and readers see how life-changing the friendship was, but when she writes about the grief she felt afterwards, it’s without sentimentality. It’s not a bad thing that she does, but rather a liberating one. She writes about her period of grief with equal control and elegant way that she did when writing about her friendship (“Life’s irrefutable forward motion, a one-way arrow pointed past the dead.”).
Let’s Take the Long Way Home is a deeply moving novel about friendship and ultimately, grief. It’s elegant, passionate, eloquent and just wonderful. Go to the bookstore and take the long way home while reading it. It’s so worth it.