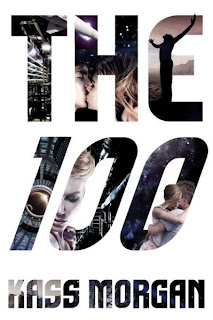 Synopsis: In the future, humans live in city-like spaceships orbiting far above Earth’s toxic atmosphere. No one knows when, or even if, the long-abandoned planet will be habitable again. But faced with dwindling resources and a growing populace, government leaders know they must reclaim their homeland… before it’s too late.
Now, one hundred juvenile delinquents are being sent on a high-stakes mission to recolonize Earth. After a brutal crash landing, the teens arrive on a savagely beautiful planet they’ve only seen from space. Confronting the dangers of this rugged new world, they struggle to form a tentative community. But they’re haunted by their past and uncertain about the future. To survive, they must learn to trust – and even love – again.

Review: The plot vaguely reminded me of Wall-E, with it’s testing to see if Earth was hospitable after a long abandonment and a story that centralized on love, but The 100 fails to reach Wall-E‘s level of enjoyment.
Told from multiple points of view, The 100 is a novel that makes for better TV than literature. The writing bored me at times, despite the fact that I thought the character flashbacks were intriguing, the novel failed to captivate me. I was a little annoyed at how everyone’s back stories and current stories seemed to centralize on love. I can understand how love could be a motivator for what they did, in the example of Bellamy and Octavia, a brother-sister pair who lost their mother, their only guardian.  However, by having love as a central theme, rather than putting the issue of how to survive in a foreign environment at the forefront was annoying and a little unrealistic. I think the characters would probably be more interested in how to find food and shelter than win back their former loves in their situation.  For TV though, it’s  more satisfying , which is probably why it’s currently in development for The CW’s fall 2013 season.
Maybe it’s the fact that the book is part of a multi-series but I don’t think I’ll be sticking around for the rest. (TV show, maybe.) There were good moments, but there were too few. I liked hearing the character’s backstories more than I liked their current stories, which is problematic since the plot is focused more on the present. There’s a love triangle, with a girl who seems to be oscillating between the two a little too easily and a government that’s a little messed up (though probably less than other dystopian/post-apocalypitic novels), things that are seem to be  typical of YA dystopian novels nowadays and the author fails move away from the tropes. Yes, the setting is in partially in space and there are people coming back to earth, but there was so much potential that The 100  failed to live up to. The writing was pretty, but the plot. Oh, the plot.
Ultimately, The 100  was intriguing and I finished it in one sitting, but I think probably watch the TV series  to find out what happens to the characters.

review copy from the publisher

Edit: I found the trailer for The 100, which I’ve embedded below. The characters look older than I thought they would be.