Sometime last year, I had the chance to read Elsie Chapman’s debut novel, Dualed*. It has a snazzy cover by Michael Heath. It appears with a digitally rendered cover, instead of the usual covers with photographs. Yay! 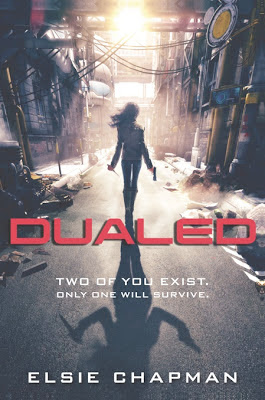 While it is another dystopian novel (dystopian seems to be very “in” right now, something no doubt is due to The Hunger Games), Dualed has many characteristics to set it apart. Dualedis set in Kersh, a futuristic place where there is  a set of two genetically identical people-Alts. When they are between the ages of ten to twenty, the Alts face off against each other. “Be the one, be the worthy,” is the motto of Kersch. Supplies are limited and the only the strongest will win. (Cue Darwin’s theory of evolution.) West has just received her received her orders to start hunting her Alt. She’s capable of using many weapons but is she capable enough?
Dualed is a fast-paced action novel, which kept me on my seat. The writing was flowed well and was smooth, something that is not typical of action novels (“That pale,ashy light of a dying winter’s day is darkening to speckled granite, swirling with cloud now. Thin shadows of the last stubborn leaves still clinging to the maple tree drift overhead and are gone.”). I also liked how romance didn’t play a huge part of Dualed. I’m a little tired of love-triangles (seriously, they seem nearly ubiquitous in YA novels) and action novels that turn into romance stories (Hunger Games, I am looking at you). Romance was only a side note in Dualed, which was so refreshing. The romance is obvious but it’s not the focus of the novel.
Dualed is as much a story about surviving as much as it is about ethics. When is it okay to pit children against each other? Survival of the fittest, literally. Alts are genetically identical so it’s the upbringing that makes the final difference.
At the end of the novel, Dualedbecomes a little philosophical but it’s not contrived, which is such a relief. West says, “Time plays with you, toys with your mind. Sometimes it flows slow and languid, sometimes so quickly that if you dare to blink you’ll miss it all.”
I loved the writing of Dualed (very picturesque), the story (it made me think) so go out to bookstores (or online) and buy it!
Dualed comes out on February 26th, 2013.

I had the chance to interview Elsie about the book and here it is below:

Interview below the jump. 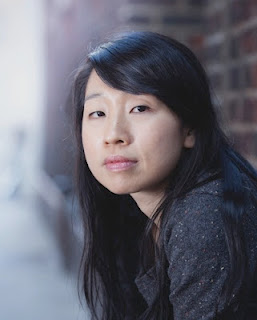 1. Which character in Dualed do you relate to the most?
I can definitely relate to the parents who show up in the book. It’d be a horrible thing, only being able to stand by and watch as your kids go off to face their Alts. I can also relate to any Alt who’s dead because there’s no way I’d survive in such a world.
2. What kind of person would your Alt be?
The first answer that popped into my head was that she would be like me, but that’s not necessarily true. Alts share a lot of the same traits as well as physical looks, but environment and experience come into play, too. My best answer is she’d be the same, but also different.
3. The first draft of Dualed  took you five weeks to write. How long was did it take from conception to publication?
I think by the time it’s on the shelves in February, it’ll be a little over two years. Which sounds insane! But so much happens in between that the time eventually proves necessary. Of course, there’s a lot of just waiting, too, which is probably the hardest part!
4. What was the process like behind the making of the cover?
Most of the time, authors don’t have much to do with the process at all. Which for me was perfect because I wouldn’t even know where to begin! For DUALED, my publisher came to me with a few mock-ups and different directions that the cover could take. Artist Michael Heath came on board, and eventually it got narrowed down to the current cover, which I think is absolutely perfect for the book. The model for DUALED, Shanna Grace, actually contacted me a few weeks ago to say hi! So that was really cool. She’s back for the cover for DIVIDED, as well.
5. What message do you want readers to take away from Dualed?
I’m not sure all books have messages, or should. I didn’t write DUALED with a message in mind at all, but I do think messages can sometimes form as a story evolves. West is a flawed character, and she makes mistakes, but she’s also doing what she feels needs to be done. Whether a reader comes away with anything from that is ultimately up to them.
6. Kersh, the setting of the book is a violent place yet the citizens stay relatively civilized. Why is that?
I think a lot of it comes down to survival and somehow finding a way to just keep going. In a world where killings are not only normal but also expected, it’d be almost easy to let everything fall apart. So it says a lot to be able to take that feeling and not be overwhelmed by it.
7. Will readers be able to see any one from outside of Kersch in the later books?
I can’t say for sure? I know, that’s a non-answer, sorry!
8. We learn that West, the main character, likes to paint. What type of things would she paint?
I think she’d paint using lots of colours and expression. She goes through a lot, so painting would probably be her way of escaping from reality for a bit, when she’s able to let herself do that.
Thanks Elsie for letting me interview you!

*Review copy provided by the publisher, via Netgalley