I picked up Morning Glory by Sarah Jio at BEA, partially because it was at the first booth that I went to and partially because I liked the cover. Further research showed that Sarah Jio is a NYTimes and USAToday bestseller.
Obviously someone was living under a rock for a while because Sarah Jio apparently is quite famous. She was also magazine writer and after finding this out, I became more enlightened about main character in Morning Glory, who is also a former magazine writer (editor, in fact). 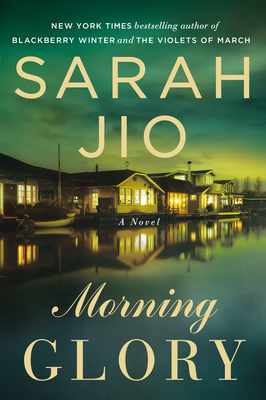 Morning Glory is the story of Ada Santorini, former editor of Sunrise magazine, who’s moved to a Seattle boathouse from NYC. She’s trying to escape from a tragedy that happened a couple years before and it’s still hard for Ada to face the repercussions of what happened that day. The boathouse community on Boat Street are friendly but at the same time, they’re all trying to hide what happened one fateful day in 1959.
Morning Glory isn’t a mystery novel in the Sherlock Holmes sense but it is the story of a woman trying to discover the past of the former owner of her house, a woman who is in many ways like her and was part of what happened that fateful night.
The pacing for Morning Glory was nice, but too many times did I feel like everything was too contrived, everything too perfect. Ada had her issues, her inability to move on from the past and her fear of letting people into her inner circle, but even then, I didn’t feel like I knew her. The characters had problems but you just knew that the characters would have their happy endings.
Even the ending was perfect. A little too perfect. Literally everythingcame full circle and everything tied up. (There was one open ending, but that was a minor one.)
In all, Morning Glory seems more like a summer read, short and sweet, not something that I’d spend longer fall nights reading. It’s not like that I didn’t like the book, which I do, but that it’s an average read for something I feel like would get a lot of hype/publicity later this year.

Review copy provided by the publisher at BEA