Earlier this year, I had the chance to read Buddy: How a Rooster Made me a Family Man(Crown Publishers (Random House), publication date: November 13th 2012) written by journalist Brian McGrory (Boston Globe editor and writer). The reason why I wanted to read it was not so much about how Brian McGrory turned into a family man but how it was a rooster story. I’ve read stories about how a dog changed a man’s life, how a monkey can help a person, and more, but never a rooster. 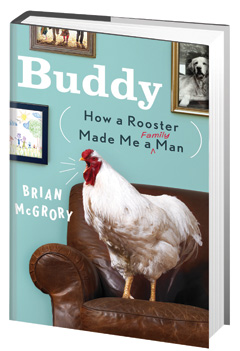 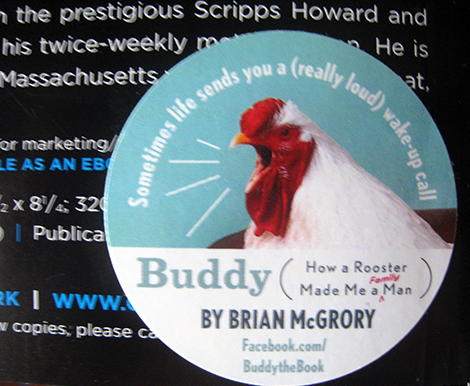 For most books, I can tell if the book is going to be good right from the first page. Buddy is no different. It begins with, “Try as you might, you never forget that time a rooster announces the dawn of a new day from your very own yard.”  Right from that, I knew that Buddy was a humorous, honest, insightful story about how a rooster changed a man’s life, but also a well written one.
Buddy  is the story of how a rooster changed the author’s life. Brian McGrory’s dog, Harry dies and McGrory slowly realizes that there’s something missing in his life. It involves someone he’s known for a long time-Pam, Harry’s veterinarian. However, Pam has a home in surbubia, a yard, two young daughters and a rooster, Buddy. Buddy is protective of his owners and he’s not going to let McGrory in so easily. Slowly however, McGrory learns lessons about life, love and understanding from a crazy rooster.
I didn’t even get to the part about the rooster and I fell in love with the book. Readers were just getting to know Harry, Brian McGrory’s dog and the rooster didn’t appear yet.

“All Harry [the dog] saw was a guy he genuinely liked-McCurry [White House Press Secretary Mike McCurry during Clinton Adminstration]-standing but a few feet away in a pretty good position for a game of indoor fetch… Harry… announced himself with a low, guttural playful grow, picked the ball up, and dropped it on McCurry’s shoes…

Years from now, as historians struggle to define the Clinton Doctorine, they’ll undoubtedly listen to the tapes and read the presidential transcripts and look at this mysterious aide, Harry, as holding the answers that are so elusive.”

Through the story of animals, McGrory tells his life story in a captivating way.  There is humor (“I learned that acreage was apparently important though for reasons I don’t exactly understand; I mean, the more you have, the more work it requires.”), and colloquial language, all sprinkled throughout the book. McGrory makes the novel highly relatable (because really, who has a rooster these days?) and it’s more than just a rooster story. McGrory learns about humility and life through Buddy, however, he also learns how to be a parent and the suburban way of life in his journey.
Buddy is not a likable pet. He crows and sometimes won’t just stop just won’t stop He lives in a mini barn with transom windows, a high ceiling, cedar double doors, an upholstered chair and shelf complete with soft pillows and blankets but Buddy is still not happy. He throws temper tantrums (loud unstoppable clucking), pecks people, and in general, is one stubborn bird. Yet at the end, I liked this crazy rooster named Buddy.
I loved reading Buddybecause of the abundant amounts humor that was in it, the accessibility of the language, and the portrayal of McGrory’s life and you will too.