If you’re searching for a Mother’s Day present, buy What My Mother Gave Me: Thirty-One Women on the Gifts That Mattered the Most (Algonquin, April 2nd 2013). It’s a compilation put together by Elizabeth Benedict and features stories by Lisa See, Joyce Carol Oates, Jean Hanff Korelitz and more. 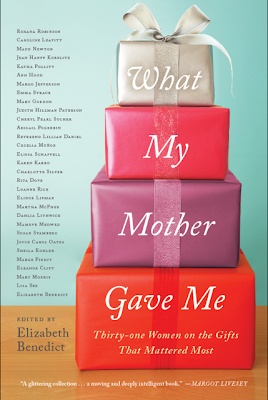 I was scared that it would be “feel-good”, story after story that were more forced than genuine. My fears were unfounded and What My Mother Gave Me is real and touching. Some of the writers chose to talk about tangible gifts that their mothers gave them and others wrote about gifts of compassion, strength and ways of thinking. Lisa See wrote about her mother’s determination to be published, which was something that See also inherited. Joyce Carol Oates wrote a short essay about the quilt that her mother gave her, who writes, “There is nothing so comforting as wearing clothes your mother has sewn or knitted for you.”
Not all of the women featured in What My Mother Gave Me had happy childhoods but even they found gifts that they received from their mothers. The essays were real, raw and honest. The difficulties were stated and the happiness were written about in a way that was neither overly sentimental or mushy. It’s due to this that What My Mother Gave Me felt so relatable. It portrays the beauty in mother-daughter relationships and it’s something that everyone should read.