Keeping with last week’s Kazuo Ishiguro theme that I left off on, I’m reviewing another on of his books! (On a side note, my blog titles have gotten so boring! My brain refuses to run on low energy and be creative at the same time…) 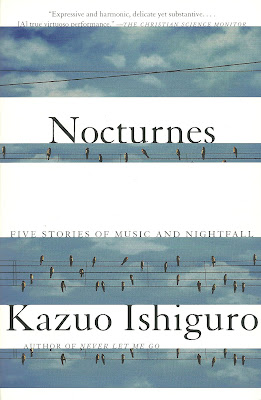 I bought Nocturnes, a short story collection by Kazuo Ishiguro last year, around August when Borders was closing its stores. It was the only Ishiguro book left other than Never Let Me Go, which I had already placed in my shopping basket. I mentioned earlier on this blog that I don’t really like short story collections, but I bought this anyway because it was by Kazuo Ishiguro.

The stories presented in Nocturnes are connected by the common idea of music and realization. There’s five stories in the book, and the synopsis at the back of the book says, “five short pieces of fiction to create a world that resonates with emotion, heartbreak, and humor.”

The reason why I dislike short stories is because they’re so short, without a complete ending. They make me longing for more, even though my brain tells me that the story is done. It’s the reason why I didn’t like Nocturnes the first time that I read it.

The reason why I didn’t like it is because it only presents a snippet of a scene. Someone will tell me, “It’s a short story, what did you expect?” Uh, I don’t know…? More of a closure? Characters are presented with obvious problems: a famous musician is trying to detach himself from the one thing he loves, a musician who believes changing his appearance will be the answer to boosting his career, etc. The endings of the stories give some kind of a closure, but it’s open enough to leave me wondering if the character’s life got better or worse.

It’s been another year after I first read it and my opinions have changed. I’ve thought a lot about life and writing, both of which are evident in this blog. Life changes, I experience things that change my views towards certain things.

The thing about short stories, I think, is that it leaves readers contemplating, not in the way that people contemplate about how confusing a story was, but the type of contemplation after something profound or thought-provoking was said.

Nocturnes is a melancholic book. It’s not a mellow book, since no one dies, but I like to read Nocturnes when I feel a bit mellow. It’s one of those books that are sad, not tragic, just sad. There’s a slow ebb and flow to the writing that pushes the reader forward, on the boat watching the characters.

It’s a profound book, full of substance but told in simple stories. I first read it, filling my head with stories of characters. Second time around, my mind filled with thoughts, not necessarily about the characters, but thoughts about life in general.

Ishiguro paints a vista into the lives of people who are so entwined with music. They’re ordinary characters, who make decisions that are not the “best” decisions. However, that’s life, you know? The ordinariness of the characters further bring to light that that’s the way life is- ordinary.

Readers walk away with summations about life, seeing the ordinary characters reach epiphanies. Can we? After all, we’re all ordinary people, too.