Last year, I started to read medical fiction/nonfiction literature novels. My two worlds, literary and medicine, started to collide when I read When Breath Becomes Air and I decided to continue reading more.

It’s still new and strange to me that I’m now a part of the world that I read about months earlier and I still feel that excitement and eagerness I felt when I read these books. The days can seem long from the classes and intense studying so it can be easy to lose sight of the reason why there’s an interest in medicine in the first place but re-reading these books reminds me of why I’m here and centers me. (Physician burnout is real and this STAT article has a lot of good points about physician burnout.) 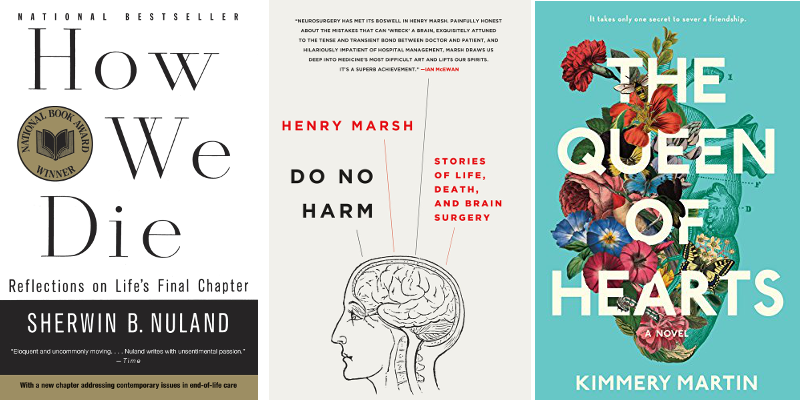 How We Die: Reflections of Life’s Final Chapter by Sherwin Nuland
A friend of mine is considering switching to healthcare and I gifted her this book. She already owned a copy of When Breath Becomes Air so I thought this should be the next book in her collection. It’s a thoughtful and comprehensive book about the way we approach death in its many forms, not only medically, but also historically, culturally and philosophically. Sherwin Nuland was a physician and a professor at Harvard Medical School but he focuses more than just medicine, which I really enjoyed.

“There is a nice Victorian reticence in denying the probability of a miserable prelude to mortality, and it is what everyone wants to hear. But if peace and dignity are what we delude ourselves to expect, most of us will die wondering what we, our doctors, have done wrong.”

Do No Harm: Stories of Life, Death and Brain Surgery by Henry Marsh

Do No Harm, by British NHS neurosurgeon Henry Marsh, explores the struggles that physicians experience through vignettes of his life.

“They call us heroes, and sometimes gods,” Marsh writes of his patients. “Perhaps they never quite realized just how dangerous the operation had been and how lucky they were to have recovered so well. Whereas the surgeon, for a while, has known heaven, having come very close to hell.”

Perhaps it’s because Henry Marsh is at the end of his medical career that he’s able to write with such genuine honesty, exploring how he’s plagued by his past failures and his lessening detachment to his patients. Marsh uses humor to lighten the mood, while talking about the dark aspects of medicine but there are also lighter moments, where he talks about successful surgeries and his humanitarian work. Reading Do No Harm, I saw not only saw the flaws that exist in medicine (Marsh mentions the bureaucratic policies that exist and sometimes seem to exist as a distraction than an aid for the patients) but also why medicine remains so appealing.

“ ‘Have you tried your password?’
‘Yes, I bloody well have.’
‘Well try Mr Johnston’s. That usually works. Fuck Off 45. He hates computers.’
‘Why forty-five?’
‘It’s the forty-fifth month since we signed onto that hospital’s system and one has to change the password every month’

What I liked most of all, is that Marsh was also honest about the human aspect of being a neurosurgeon. As with shows like House and even the long-running Grey’s Anatomy, Do No Harm explores the humanity of medicine, success and failures, both in Marsh’s professional life and nonprofessional. He talks about his helplessness as a parent as he watches his son undergo neurosurgery:

“It was a useful lesson for me, when I became a fully trained surgeon myself, to know how much my patients’ families suffer when I am operating… Anxious and angry relatives are a burden all doctors must bear, but having been one myself was an important part of my medical education. Doctors, I tell my trainees with a laugh, can’t suffer enough.”

Queen of Hearts by Kimmery Martin

Kimmery Martin is a physician-turned-writer (she describes herself as a “lapsed Emergency Medicine physician”) and Queen of Hearts is her debut fiction novel. The novel is about the friendship between two women who went through medical school together and are finding their footing in their thirties but there’s a secret between them.

Queen of Hearts follows the stories of two best friends, Emma and Zadie. They met in college and survived medical school as well as residency together. Now in their thirties, Emma and Zadie have established their careers– Zadie’s a pediatric cardiologist and Emma’s a trauma surgeon, and their personal lives are going well. Yet, the return of a resident from their medical school years threatens to break their long friendship apart, as one of them harbors guilt over an event that happened years ago. It explores the intimate familiarity and deep bond that occurs with long friendships as well as the secrets that both parties avoid talking about.

What I loved about Queen of Hearts was how it was both lighthearted and serious at different points and the engaging as well as humorous voice. Careers in medicine are grueling and many make sacrifices but there are also really great moments that make everything worth it. It’s a great read for the summer days that are winding into fall.

(I also love the fact that Kimmery Martin is a huge book nerd. #relatable)