It’s weird because I know Mom is right about the big picture. But Dad is right too: Life is really just a bunch of nows, one after another.” – Liar & Spy by Rebecca Stead 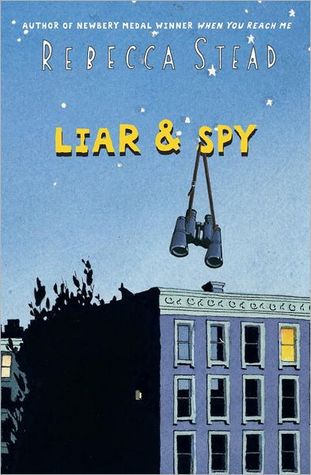 Today’s the publication date for Rebecca Stead’s Liar & Spy, a charming children’s book about a boy named Georges (pronounced George) and his friendship with Safer, a twelve year old boy who lives in Georges’s apartment building.

I rarely review children’s book because I feel like I’ve grown past them. This however, is a book that still touched me, despite the fact I was a middle school-er (Google spell check is refusing to let me type it without the hyphen) eons ago.

Georges’s father lost his job and Georges’s mother has been working longer shifts at her job as a nurse at the hospital  to make up for the drop in come. Georges has moved to an apartment building from his cozy house. Georges tries to adjust to his new life, but it’s quite hard when there’s a bully, Dallas, at school.

The story isn’t new. It’s been done before. However it’s Georges’s voice and Rebecca Stead’s pacing that makes Liar & Spy so fresh. Georges has a humorous and mature observation towards the world around him that doesn’t feel too immature or forced. It feels, for a lack of a better word, natural, Georges doesn’t sound too young, too mature, but rather a real, 7th grader. Georges understands the world around him, most of it.

The hook or the beginning of the book is wonderful.

“There’s a totally false map of the human tongue. It’s suppose to show where we taste different things, like salty on the side of the tongue, sweet in the front, bitter in the back. Some guy drew it a hundred years ago, and people have been forcing kids to memorize it ever since.

It speaks volumes about who Georges is, and the pacing of the book, right from the get-go. I read the beginning, just the first paragraph and thought, “I felt the same way!!” (And yes, with that many exclamation points.)

The first page of the ARC has a letter of from the publisher, Wendy Lamb, who says, among other things, “Liar & Spy stars real kids, because Rebecca [the author of Liar & Spy] understands their fears, their courage, their cruelty, their goofy inspiration and humor, and how they help each other.” I agree. The characters are so real and Rebecca Stead has really, really, captured the thoughts and feelings of middle school age children.

Liar & Spy takes me back to middle school- the innocence, the last place to be “oblivious”, with students on the cusp on discovery of self and realization life. I remembered the trips, falls and surprises of middle school, no memory glossed over.
Georges is definitely self-conscious and aware of his surroundings but it’s not bordering on teenage angst. It’s this and other things that make Liar & Spy so lovable. The humor, the happiness, the questioning.
The book explores the topic of what makes a game, a game, and how far someone is willing to go for friendship. It answers these questions through actions, following one of the well-known writing advice, “Don’t tell, show!”

This is a bittersweet story about friendship, family, and growing up. It’s definitely an interesting read, no matter at what age.