Winter break for me ended quite uneventfully (unless you count the plane ride back when a passenger broke the overhead bin or the fact that the x-ray machine for luggages broke for a good 15 minutes in security). I’m back in the grind of school and unforgiving chilly winds of winter with snowstorms here and there, which for me is the deal breaker in this whole whole business. Not the school part, just the weather part.

But the weather leaves me with a good excuse to stay indoors and curl up with a book or two while sipping hot chocolate or tea. Occasionally, I’ll DIY something if I have time.
Over break, I made some bookish cards to send out and some to keep. Where’d You Go Bernadette was such a card that I kept.
Where’d You Go Bernadette is probably the book of 2012. I bought it late 2013 but I didn’t read it until last summer. It’s an epistolary novel about a woman named Bernadette Fox living in Seattle who finds so Seattle insufferable that she has an assistant in India do even the most basic jobs. To her husband, Bernadette is opinionated. To her daughter, she’s just Mom. Yet to other private school moms, Bernadette is a disgrace and a nuisance. One day, Bernadette takes off and Bee, Bernadette’s daughter is left to figure it all out.
I really liked the book as well as the cover so I thought I’d do a tutorial on how to make a Where’d You Go Bernadette card. For those who are curious, Keith Hayes, who’s an art director at Little, Brown according to LinkedIn,  designed the cover. Talking Covers has a great interview with both Maria Semple, the author, and designer Keith Hayes about the cover. 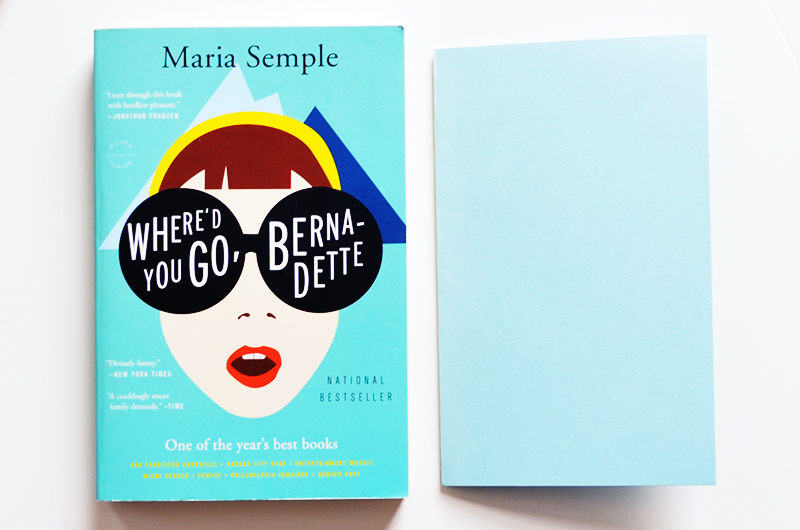 1. Fold your paper in half. I like to trim the ends of my cards to ensure that the edges all line up. 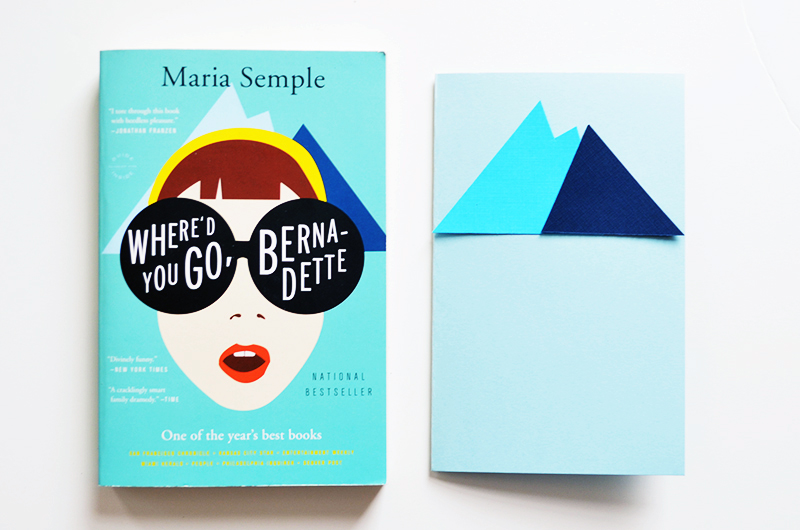 2. Start with whatever is in the background the farthest. In this case, it’s the blue mountains. Sketch the shapes onto the colored pieces of paper. Make sure that the sizes are relative to the overall size of the card. 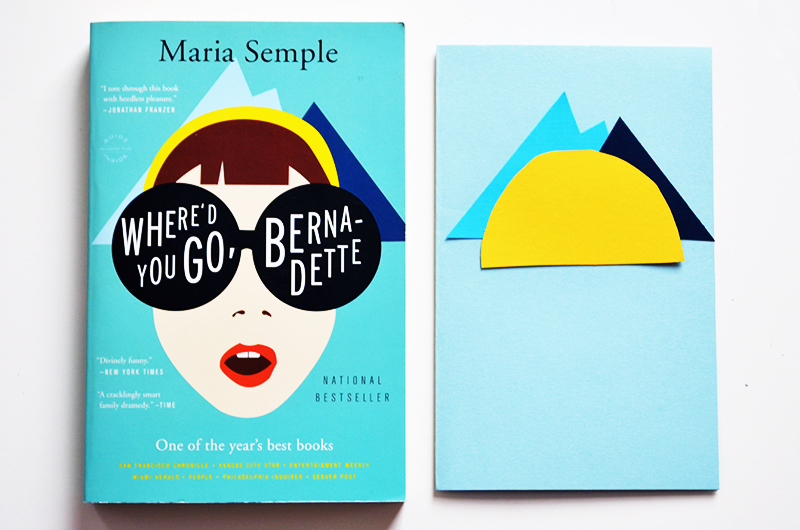 3. Next is the yellow headband that Bernadette is wearing. It’s a half-moon shape. 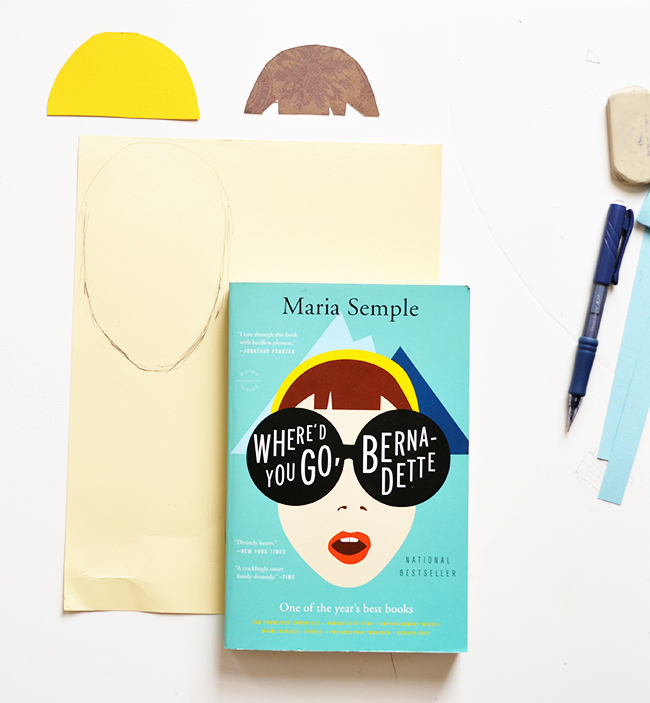 4. Next are Bernadette’s bangs. Cut a smaller half-moon shape and snip a couple of triangles away. Cut out a face shape as well. 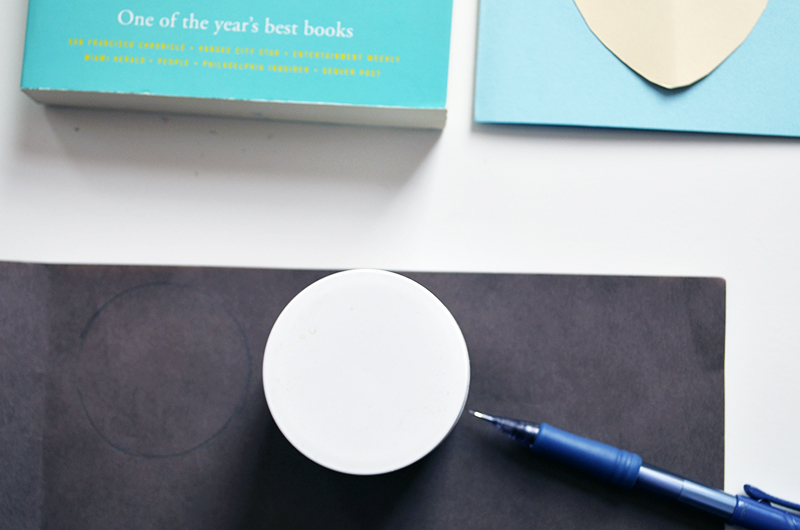 6. Next are Bernadette’s mouth and nostrils. The nostrils are two tiny scraps of paper (I used the same paper that I used for the hair). I sketched out a similar sized mouth by looking at the cover mouth. Two curved lines connected make up Bernadette’s inner mouth and two squares make up her teeth.

7. Looking at everything laid out, I decide that I don’t like the size of her sunglasses (too big) and that her bangs need to be more rectangular. I trim everything down. 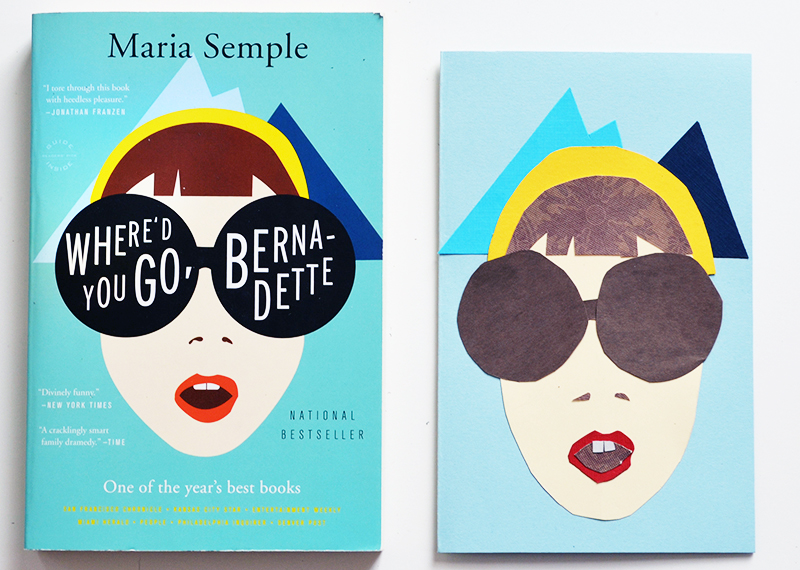 8. Time to glue everything down.

P.S If you’re looking for DIY Penguin Classics cards,  I made a tutorial over at Quirk Books! 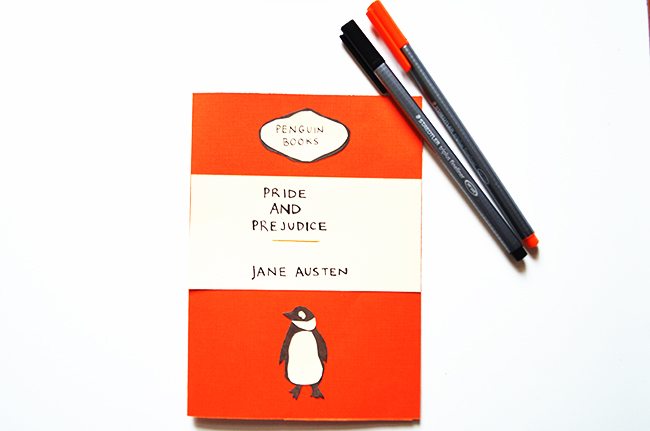