It’s Wednesday morning and we’re midweek into the grind of the work day or school day, depending on who you are. Wednesdays are neither close to Monday nor Friday and I think that’s my biggest problem with it.  On Wednesdays, we wear pink. Have I ever told you I dislike the color pink and Wednesdays, too?
Wednesdays tend to make me unusually tired and sluggish, which is in part due to my long Wednesday schedule, but it’s also due to the fact that I tend to reflect back on the past couple of days and re-evaluate my plans to tackle the rest of the week, savoring the sensation of relaxing come Friday night. 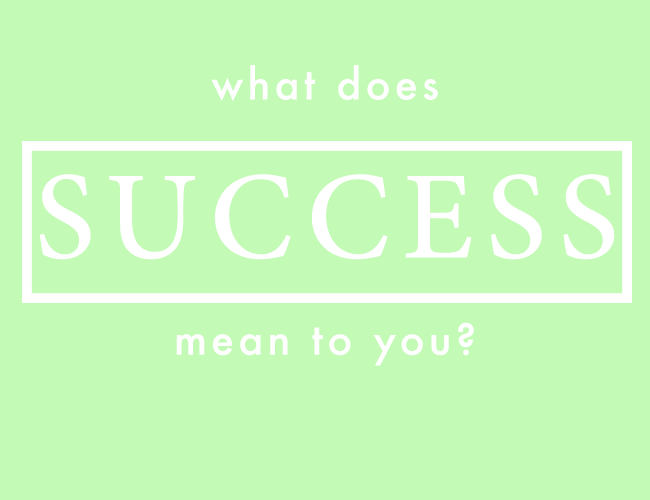 In part, my habits stem from the fact that I need to be reminded of my goals and to make sure that I’m working towards them. I think it’s partially due to the fact that  I used to spend a lot of time admiring people’s successes, but lately, what success means to me has changed. It’s a lot less about being in a tangible”place” and more about the intangible experiences I’ve had.
Success always seems to be about being in a place, doesn’t it? A woman started a company and the adjective used to describe that business is “successful“.  A blogger makes blogging a career and articles describe that blogger as having a “successful career”. However, I don’t think the people themselves would really describe themselves as being successful– they are looking at the next milestone that they haven’t reached.
It’s always about the next thing isn’t it? But like the SAT writing mantra that always appeared in workbooks, it’s about KISS. Keep it simple, (stupid).
It’s not about perfection, though success seems that way a lot of the times– the successful people who live seemingly perfect lives. It’s about doing things that make you happy, cleaning out your life and keeping it simple. It seems like a feat nowadays with 4 different, ongoing Facebook group messages, constant texts, three pressing emails and one phone call from your mother asking what you want all at once. It means putting a pause on all those notifications, answering that phone call because let’s face it, she’s going to call back until you pick up, and getting things sorted out. It’s about doing things on your own terms— flaws and all.

I used to want to be certain people because they had certain things– a dream career, a certain life motto/mantra but as I’m older, I’m happy with who I am because I’ve defined my life on my own terms and lived it my own way.  I still like to learn from people, find out how they got to where they are now, but ultimately, my life is what I will it to be. I cannot replicate what other people are doing; they are who they are and I am who I am. I can take tips and hints, tweaking it to something that works for me but that’s it.

For me, KISS means taking out a notebook and writing down my perpetual To-Do lists– all permutations of it, keeping an Excel calendar with all my due dates and syllabi, and not doing more things that I can handle. It’s about going on that dinner with friends, writing emails to my best friend because I have so much more to say than what texting allows, and reading good books. These are things that I do that make me feel the most “me” as cliche as that may sound and that to me is success– whether society deems it to be or not.
Being deemed successful by others is slightly overrated anyway when you aren’t happy. I don’t believe that having goals and plans are necessarily a bad thing either since I’m a perpetual planner, but rather I believe that the goals and plans that you do have should be based on something simple and personal.
KISS.

And yes, sometimes KISS is about baking a cake filled with rainbows and smiles and that everyone would eat and be happy*.

I’m curious to know what success means to you. Has it changed over time What’s your mantra right now?
*yes, it’s another reference to Mean Girls.