It in a moment filled with exhaustion and late evening/early morning delirium when I found myself talking about high school with a friend. We were both procrastinating on work, eager to talk about things, anything really. We became stuck on the topic of identity—our shared struggles to define ourselves during high school and even a little now. 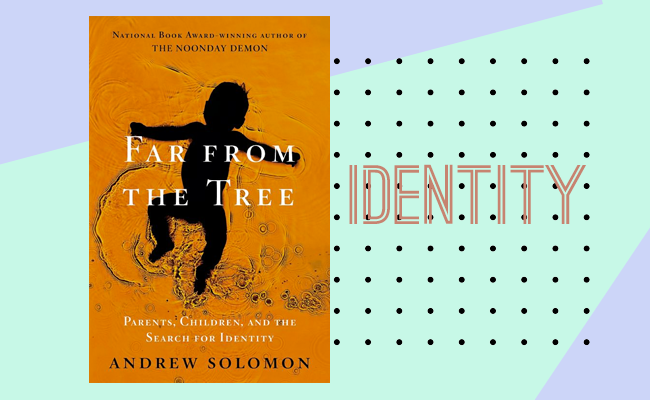 I was reading Andrew Solomon’s Far From the Tree, which made headlines in 2012, and I came across the quote, ““Belonging is one of the things that makes life bearable, and it can be tough to look at a binary world and choose against both sides.” It got me thinking, isn’t that the reason why we want to define our identities because we want to belong?
According to Erik Erikson, a famous psychologist, people could be defined by stages that have specific struggles (Erikson’s Eight Stages of Human Development). For adolescents, it’s the struggle of identity, which explains why so many YA novels feature this as a major theme. Yet, I don’t believe the struggle of identity stops with the end of adolescence, whether in reality or in books. The question of identity plays a major role in Jhumpa Lahiri’s The Lowland, The Reluctant Fundamentalistand is the core theme for Andrew Solomon’s hefty tome of a book, Far From the Tree.
So where does that leave us? I’d be lying if I said the question of who I am doesn’t bother me but I struggle with it a lot less than I did in high school. I don’t think I’ll ever define who I am, truly, but over years, the want to define myself has decreased a lot less. Perhaps it can be attributed comfort that I find in my friends and the growing confidence that I have in myself but I know that some of the things below have helped:
Journaling// Writing down my thoughts is incredibly nice and it’s the process of explaining things that tends to make me feel calmer. Also, it helps me figure out a lot.

Books// I turn to them for comfort, for escape, for entertainment and a lot of other reasons, too. I love books. Yeah?

Running// Sometimes I have a lot of pent up energy and if that energy just sits, I tend to become really introspective so I try to get rid of it through running. I love running on spring days when the weather is nice and I find running to be really therapeutic. Haruki Murakami has a book called What I Think About When I’m Running and it turns out, you can think about anything.

On the other hand, knowing who we are is helpful at times, whether it’s planning our careers or major decisions.

Do you struggle with defining yourself? What are ways that you cope? What books feature identity as a major theme?
>
Also, I like psychology a lot and connecting things with what I study really, really excites me and makes me happy.