I read A.S King’s Reality Boy over the course of a week and it was so much more worthwhile reading it, savoring it. It’s a story about a former reality-star, Gerald, ten years after his show, Network Nanny aired and the repercussions the show has on his life as he tries to find love and meaning. 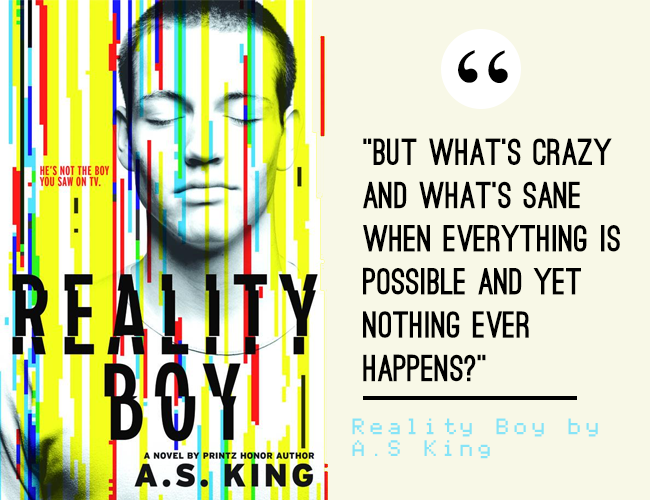 Gerald is an angry kid and his anger towards his psychopath sister, whom his parents refuse to see as such, was aired nationwide when he was a six-year-old boy and pooped in people’s shoes and walls. Ten years later, he’s still trying to deal with his anger and his rather unsavory celebrity status as the “Crapper”. Add to that an emotionally distant mother who cares more about appearances and a physically distant father. Gerald has one tough life.

Yet, Gerald manages to supercede all of that in a real way. He’s still angry and sometimes he chooses the wrong choice, but he tries to do improve himself. He’s still young and he thinks that running away from his problem will solve everything. While I do think A.S. King wrote Reality Boy in a way that reflected a lot of real life issues, I’m a little wary  on the way that physically running away started to change Gerald’s life for the better. It was a little fairy-tale like and Gerald needed the absence but I wish that Gerald was more of decision maker rather than his situation impacting the outcome impacting the result more.
While it’s a work of fiction, the book is poignant and brings up several important issues with reality television, such as the repercussions in the lives of the people who were in the show and the cultural fascination with people’s screwed up lives. I don’t watch a lot of reality television, but occasionally I’ll watch Say Yes to the Dress: Atlanta because it’s entertaining watching people be feisty and angry at each other. While it’s entertaining for the viewer, no one really thinks about the people on the other side of the equation—the people who’s lives are broadcasted on TV for all to watch. Hannah in Reality Boy says, “It’s complete Schadenfreude, dude, so most people are just watching for the thrill of being better off than the people in the show… [Schadenfreude] means when people take pleasure in others’ pain or humiliation.” While Gerald had problems before the show came into his life, the show exacerbated his anger, especially when the producers wanted retakes of scenes, even scenes where six-year-old Gerald was fighting with his sister.
Scenes like that in the book really make me question reality television and the supposed “good” that shows like America’s Supernanny can do. How much good can a nanny do when fights are reacted? What are the psychological impacts on the family when the shows done airing? The scenes that are aired are the scenes where families are at their weakest because no one is going to find a family eating peacefully interesting. While I don’t have the insider knowledge on how each reality show is filmed nor does Reality Boy reflect any one reality show, it’s important to think about the possible impacts and sacrifices that the people on the show make, rather negatively, for other people’s entertainment. Is it worth it? Reality Boy seems to make me lean towards no.
Reality Boy is such a wonderful, eye-opening read into the world of reality television and I honestly will be going back to it. A.S King always manages to capture the rawness and the emotional roller coaster of being a teenager and in Reality Boy she is no different.
Check out my Reality Boy computer wallpaper

Book Reviewfiction, little brown and company, YA, YA novel