BEA 2013 was exhausting and tiring but it was loads of fun. I can’t begin to describe the chaos, the fan-girling (NEIL, freaking, GAIMAN) and the shininess of everything so I’ve decided to let the pictures tell the story. After all, they’re worth a thousand words right? 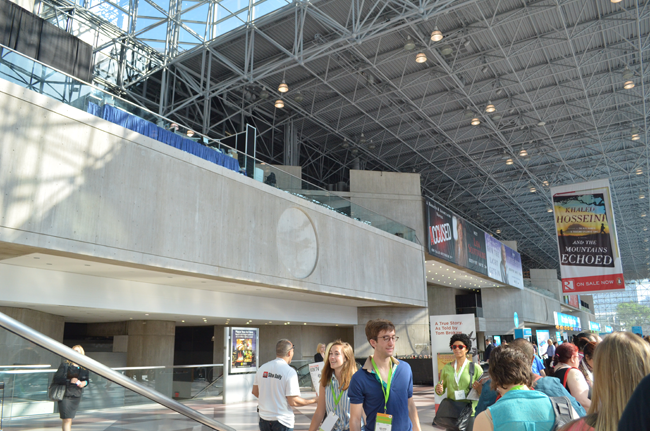 The wait line to go into the exhibit hall that’s filled with 1008 booths (I think that’s the number?). I got to BEA, which was at the Javits Center in NYC at around 8:00 am and the exhibit area opened at 9:00 am. Needless to say, I waited there for an hour. While I was waiting, I saw Neil Gaiman just breezily walk by but NO ONE RECOGNIZED HIM (At least I think I was the first person in my area of the line to point out that Neil Gaiman just walked by). I stood there just watching him pass by while holding my friend’s phone and wearing my DSLR, without doing anything. This was a huge fail moment and finally when I came to my senses, I was looking for the camera app on my friend’s Samsung Galaxy S3 at which point Neil Gaiman was gallivanting up the stairs. I managed to take a side photo of him.
Click below the cut for more. Image heavy but hey, Ransom Riggs, Neil Gaiman, Tahereh Mafi pictures are there! 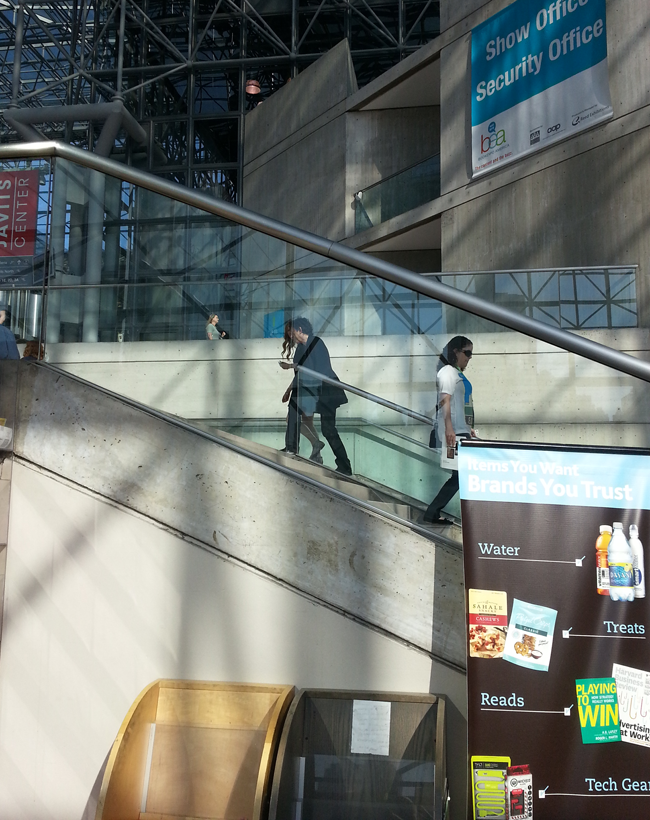 Okay, now that I’m looking at the picture, you can barely tell it’s Neil Gaiman. -____- 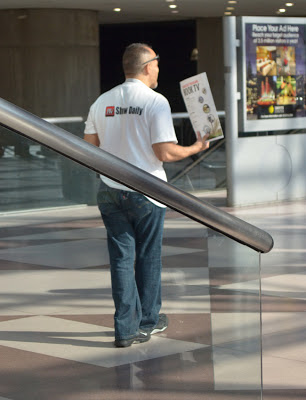 There were loads of PW Show Daily (Publisher’s Weekly) guys on the first floor, holding up the latest issue of PW Daily. I felt bad for them since they kept trying to get people to take one. It was probably the sixth guy that I ran into during my wait that made me finally feel bad for them. I had told the guy  (not the guy in the picture) that I already had one. He responded with, “Are you sure you don’t need another one?” 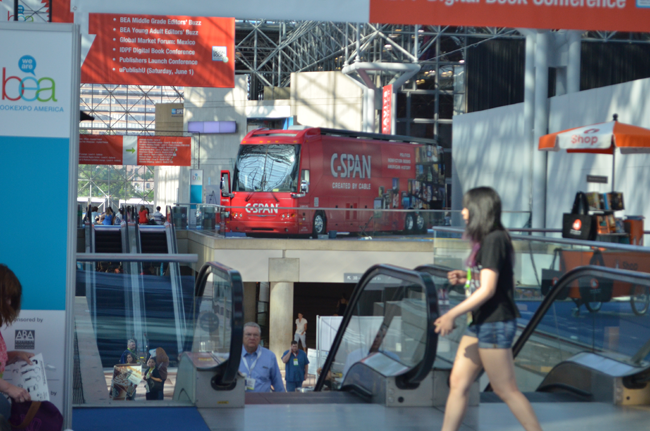 At 8:30, I got bored and wondered up stairs where I saw this C-SPAN bus. I think it was filled with nonfiction books but I’m not really sure. The old man in this picture doesn’t look too happy, though. 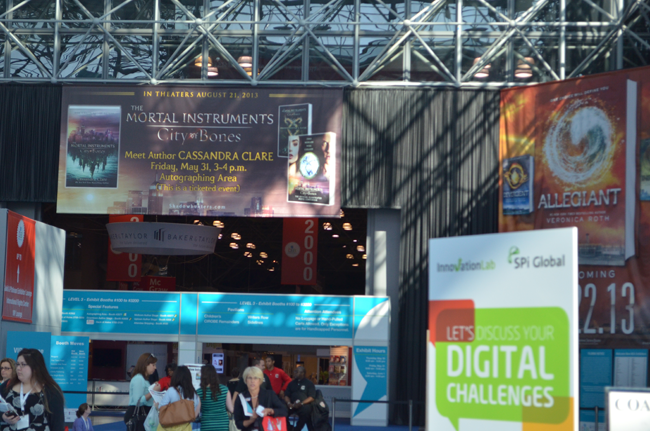 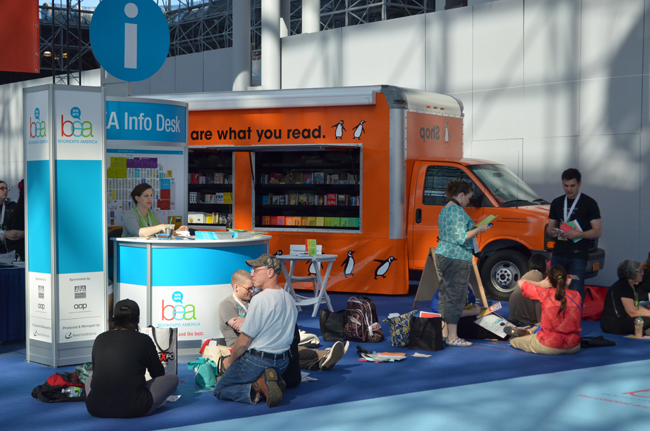 A cute Penguin Classics truck that says, “You are what you read.” 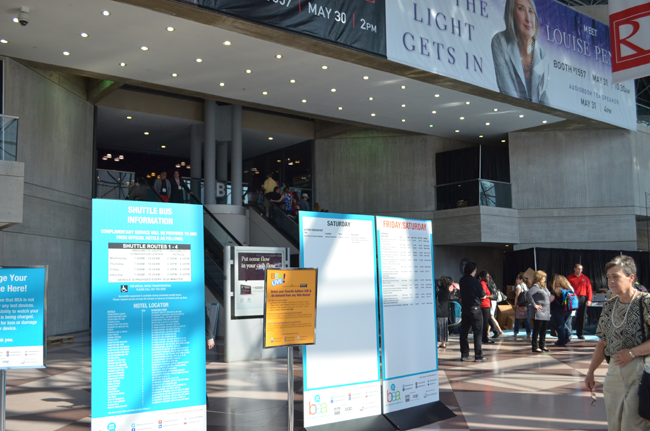 Yay! People are finally moving into the exhibit area, finally. -____- 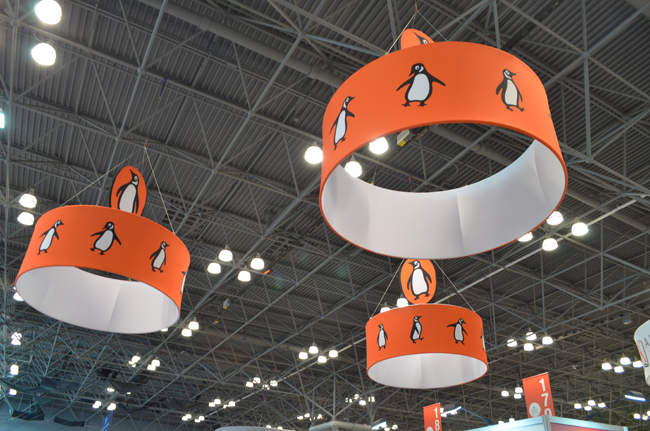 Oh, pretty penguins! Annnddddd, this is where it starts getting crazy and chaotic. It was the closest major publisher to the entrance of the exhibit area and Penguin had a bunch of ARCs, tote bags and some other stuff lying around. Needless to say, it became to free-for-all and a competition to see who could grab the most. Craziness ensued. 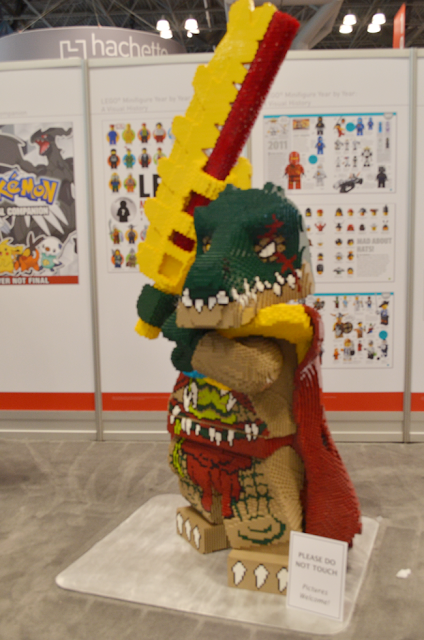 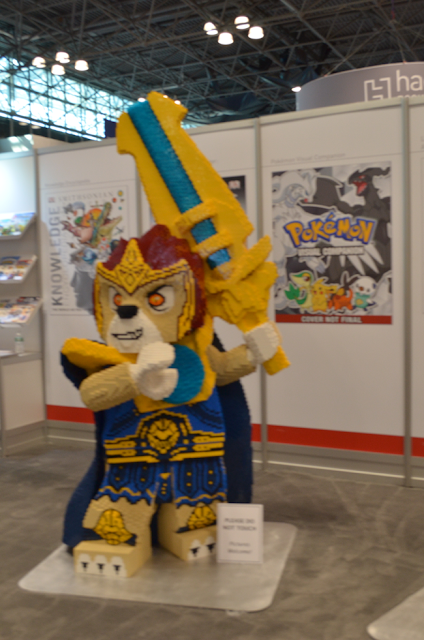 Some LEGO creatures that were at BEA. Not really sure what booth these were at… 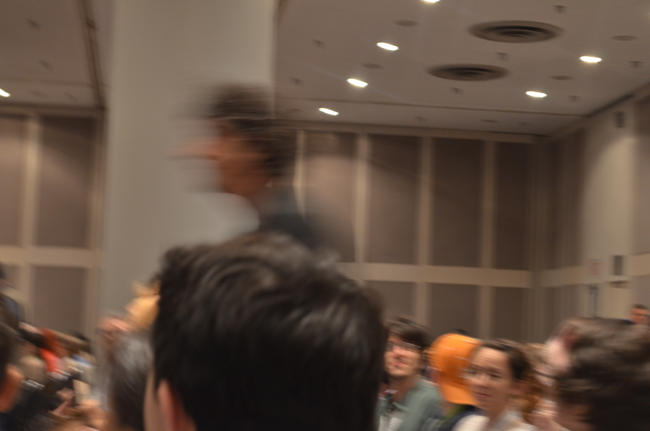 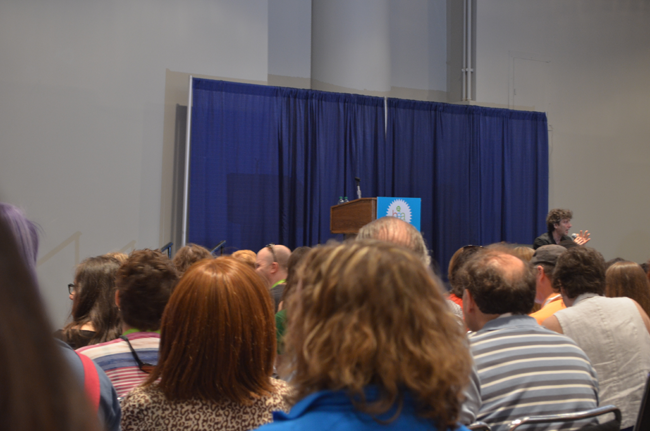 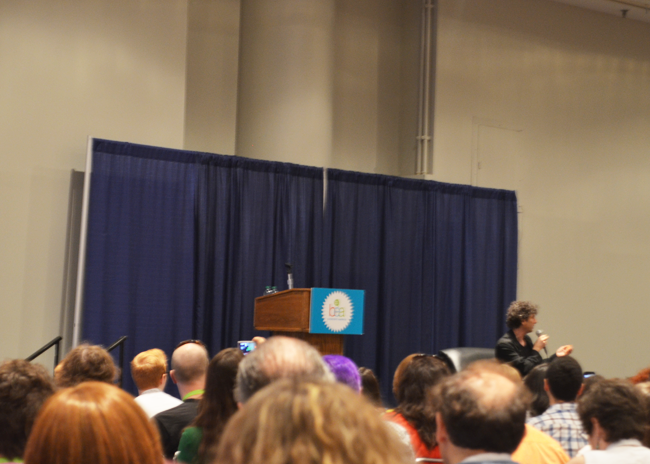 More Neil Gaiman talking! Neil Gaiman was quite funny and the actual “why fiction is dangerous” only last 5 or so minutes. According to Gaiman, fiction is dangerous because it provides you with sort of reality that’s different from the world you live in. After his talk, there was a Q&A session with questions that were submitted by the audience before Gaiman came in. We learned about how he started out, if he thinks he’s a success, the worst sentence he ever came up with and more.
The publisher surprised us with two autographed Neil Gaiman books,each. WHHHHHHHHHHHHOOOOOOA. 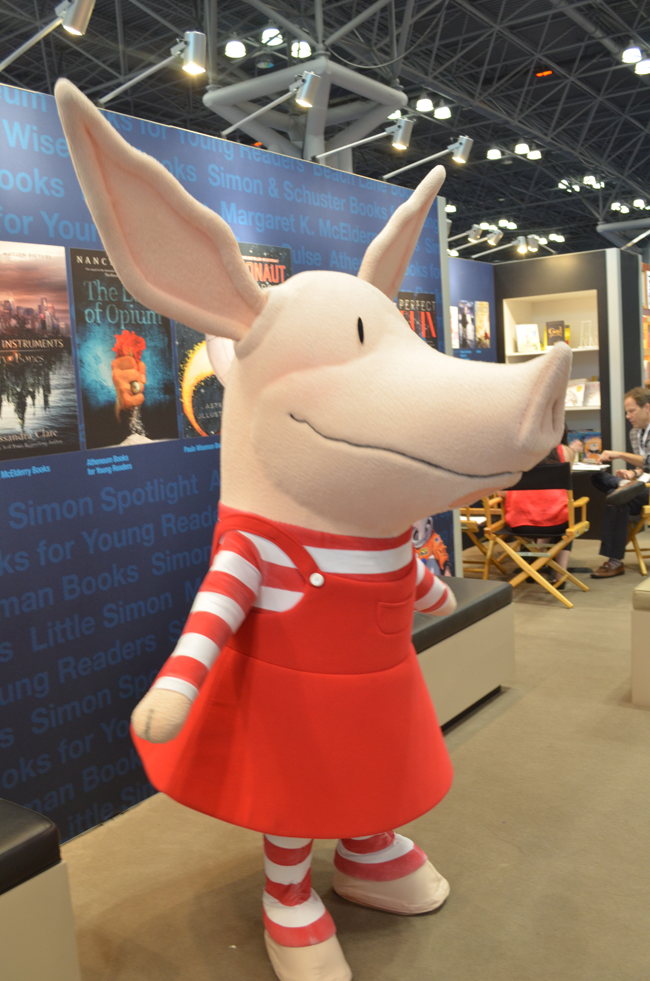 Olivia the pig! It was so cute. I was very excited and took a picture with her. 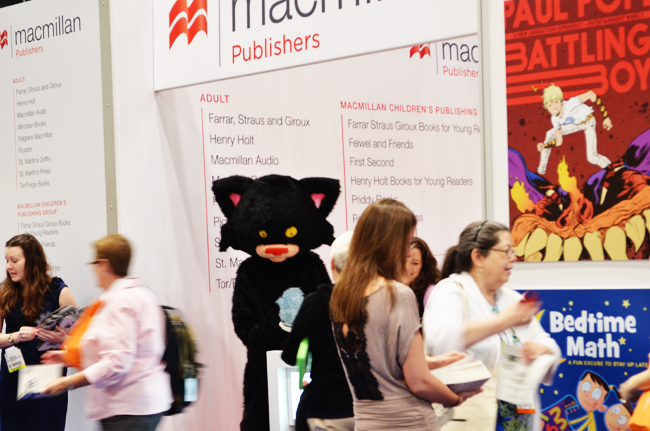 Bad Kitty at the Macmillan booth. The line stretched around the booth and I decided that I don’t like Bad Kitty enough to wait in line (sorry, Bad Kitty. You’re cute but not cute enough for me to wait one hour). 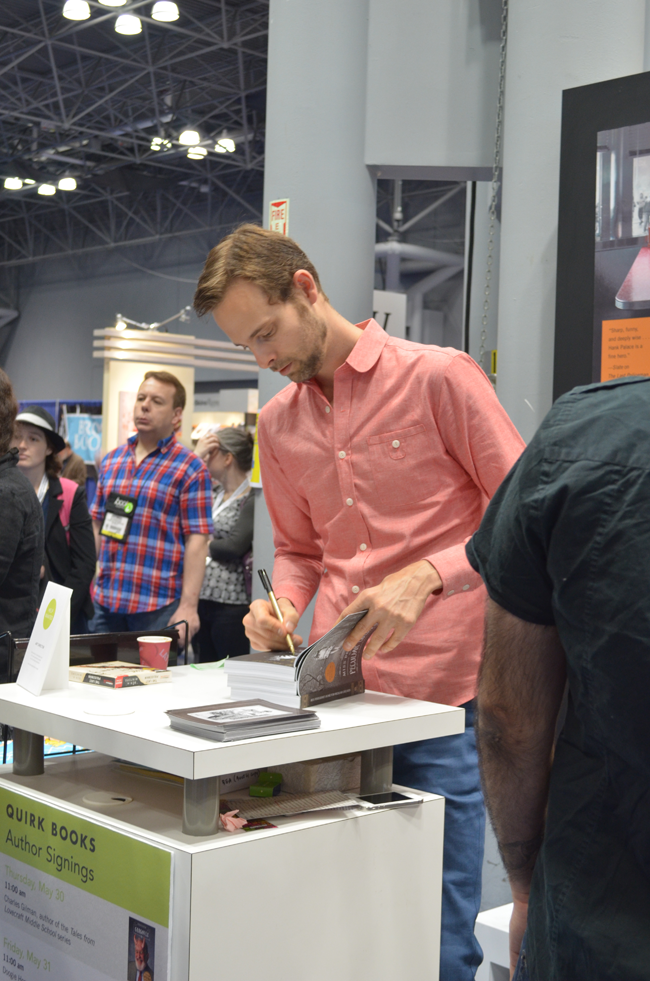 I spotted Ransom Riggs (author of Miss Peregrine’s Home for Peculiar Children) as I was waiting in a short line for Koren  Zailackas (author of Smashed). 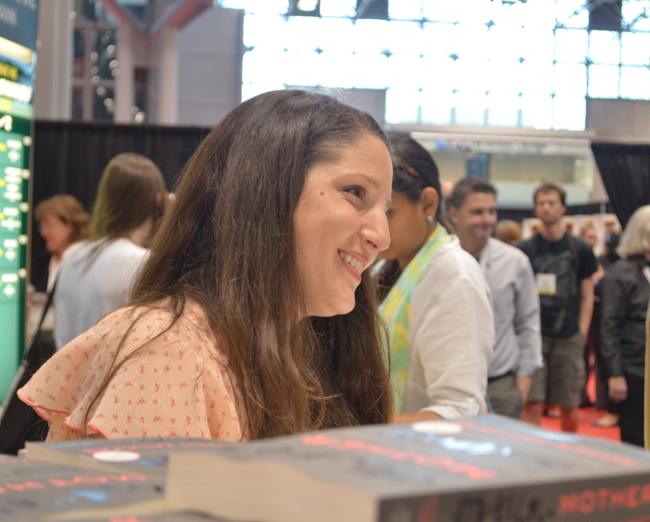 Five feet away from Ransom Riggs was Tahereh Mafi (author of Shatter Me series). I wandered around some more before leaving. BEA 2013 was fun and it was an amazing first BEA experience. Hopefully I can go next time and meet up with other bloggers! (I can’t believe I missed so many of my blogger friends. D: )
Outside of BEA, there was a cute Penguin billboard that my friend took a picture of. 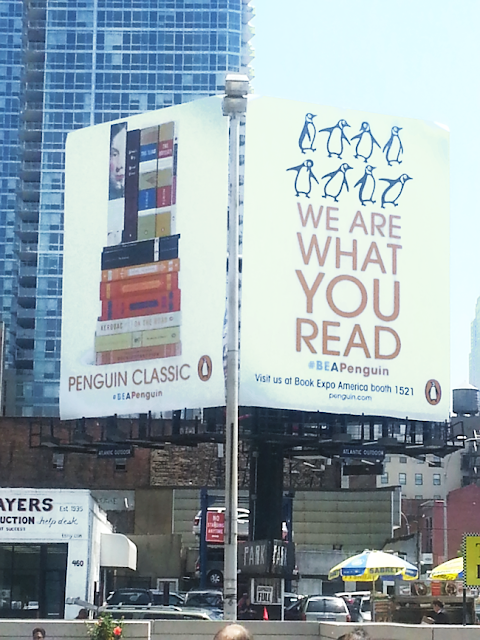 In all, BEA was a lot of fun and I look forward to going next year! Hopefully, I won’t miss all my blogger friends who are going like I did this year!