When I finished Mary Pearson’s Fox Chronicles, I had no idea that there was going to be a third book (to be honest, I think I wasn’t paying attention) , but I’m glad there is. Fox Forever is the third and last book in the Jenna Fox Chronicles and ends the trilogy that first started in 2009. 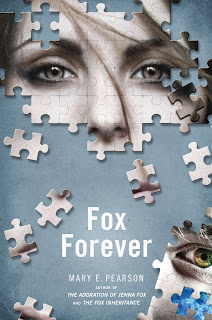 Fox Forever, like Fox Chronicles, is told from Locke’s point of view. He finally has freedom and the shady resistance group known as the Network wants a Favor. After all, they’ve helped him escape and he owes them. Locke has to infiltrate the home of the Secretary by gaining the trust of his daughter, Raine. However, Raine has secrets of her own and it may complicate things. Locke is pulled into Network and Raine’s life.
Like Fox Chronicles, Mary Pearson’s writing is stunning and thought provoking as she continues to examine both sides of genetic engineering, identity and ethics. What makes us human? The feelings that we have or what we’re made up of?
As usual, the pacing was wonderful. It was fast paced when it needed to be and slow when the moment needed to be savored. Also, the rhythm. Pearson switches between short sentences and long ones deftly.

Cock head to the side trying to understand what it is.
A breath.
A presence.
A closing in.
And then shadows.
Flashes of air.
A thousand screeches surround me and I’m knocked to the ground. Pounced on. Razors cutting into my flesh.

The ending to Fox Forever (and by default, the ending of the Jenna Fox Chronicles) is the perfect combination of bitter sweetness and hope. It was sad, it was happy, but most of all, it was satisfying.
Come back tomorrow and I’ll be doing an interview with Mary Pearson, the author of Fox Forever and a giveaway!