I’m not sure how to classify Midwinterblood (Roaring Brook Press [division of Macmillan], February 5th 2013) by Marcus Sedgwick. Is it fantasy? Futuristic? Is it a short story collection? But really, it doesn’t matter what genre Midwinterbloodfalls into because it’s a wonderful novel. 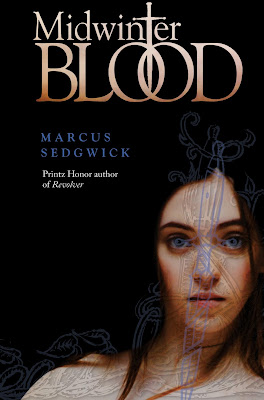 Midwinterblood is a collection of interrelated short stories that more or less revolve around the same thing, that thing I will not talk about that much because it ruins the fun of reading the novel, and it’s at the end, that the whole story comes together. The stories of the archaeologist, painter, ghost, vampire, and finally Viking are all set on the remote island of Blessed and the stories are told in reverse chronological order, starting from the year 2073 and going backwards, until “time unknown”.
The story as a whole is relatively cliché but the beauty of the novel is in Marcus Sedgwick’s (Printz Honor author of Revolver) writing. His timing and the rhythm that he sets is rather poetic, with long descriptions following short, terse sentences. The following quote, from the first page of the novel, is a wonderful example of his writing.

“For now, he [Eric Seven] checks his watch as he stands at the top of the island’s solitary hill, gazing to where the sun should set. It has gone midnight, but the sun still shines, barely dipping its heavy rim into the sea on the far horizon.

The island is so far north.

He shakes his head.

He’s thinking about Merle. How something seems to wait in her eyes. How he felt calm, just standing next to her.

“Well, so it is,” he says, smiling with wonder.

He’s tired. His journey has been a long one. “

Midwinterblood is a relatively short read at 262 pages (the rest are either filler pages or author’s notes) and the short sentences make the read even shorter. Despite its length, Midwinterblood remains an excellent read and I’m excited to read more of Marcus Sedgwick’s other novels as his writing captured me.