Growing up, I wanted a book where the protagonist just happened to be Asian. I wanted a book where being Asian was mentioned in passing and not a book that was about the joys and trials of being stuck in two cultures. While I’ve learned to embrace heritage books such as Amy Tan’s Joy Luck Club, a novel about a group of Chinese Americans who grew up stuck between two cultures and learn what it means to be “Chinese”, I still yearn for a book that had an Asian protagonist but isn’t focused on being Asian.
YALSA (Young Adult Library Services Association) blog recently posted an article about the lack of ethnicity on young adult coversand while I find this issue to be relevant, the issue of lack of non-Caucasian characters in young adult literature is more pressing. 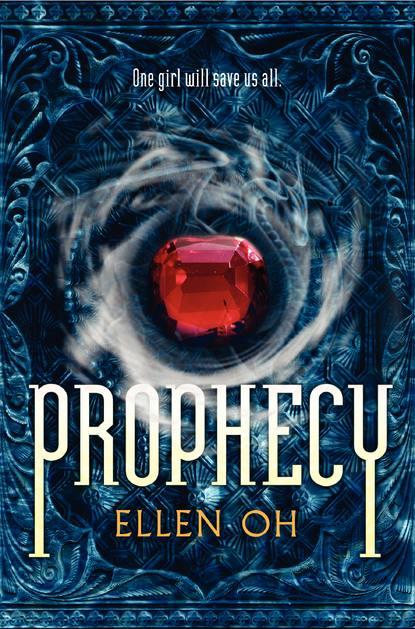 Prophecy by Ellen Oh (pub date: January 2nd, 2013; HarperCollins Children’s)  is a novel that has a whole cast of Korean characters set in a mythical ancient Korea and yet isn’t about being Korean. My younger self cheered. This book needs to be published sooner!
Kang Kira (names are romanized with last name first) is the king’s niece and a warrior. She’s also the bodyguard for the crown prince, who is her cousin. However, Kira is an outcast due to her yellow eyes. After the murders of kings and the discovery of traitors in the midst, Kira goes on the road to help her cousin, who may be the savior in the Dragon King’s prophecy. The magical lost ruby may be their only hope to save the kingdom yet again. Going along with them are an interesting group of people and they must battle evil in many different forms.
Prophecy is set in ancient Korea and is filled with Korean terms but it honestly isn’t so much about the fact that it’s set in Korea as much as it’s about a girl (who just happens to be Asian) who is strong and has spunk. The setting barely plays a role in the novel. It just happens to be set in Korea.
It’s fresh to read a novel that was set in Asia. It’s even fresher to read novel that isn’t about discovering your heritage ( don’t get me wrong, I love those kinds of books but I need a break from them once in a while) while being set in Asia. Prophecy is interesting and filled with twists and turns. Reading it, I couldn’t help but be reminded of the Korean dramas (in a good way) that I occasionally watch during school vacations.
Many people compare Prophecy with Graceling, but I haven’t read Graceling so I can’t say how similar or how dissimilar they are. If I had to pick a bone out though,  I felt that the climax of Prophecy was a bit too weak because when it reached the climax, it was a bit like “Oh…” [no pun/joke  intended].  Nevertheless, I do feel that Prophecy is a relevant book since it’s featured in Korea but isn’t necessarily a heritage book.  I needed some of these kinds of books growing up and I’m happy that publishers have started to diversify from Caucasian characters to non-Caucasian, specifically Asian characters.
I’ve also snagged an interview with Ellen Oh, who was kind enough to fit a short interview in her busy, busy schedule!

Book Reviewinterview, YA, YA novel