When I was reading Twilight in middle school (this was before it became popular and before New Moon came out) , it had struck me as peculiar that there was a notion that visions of the future weren’t definite. In Twilight, Alice Cullen (the vampire that can see the future) has a vision where Bella is killed. Edward, who can read minds, is angered by this vision and runs off to Alaska for a brief respite. However as we all know, Bella doesn’t die in Twilight, so the vision was false. Before then, I had watched movies and read books where visions of the future always came true.

My thoughts about visions of the future was challenged yet again when I read The House of Velvet and Glass, by Katherine Howe. I had first found the book in the new books section of the library and the title (yes, the title intrigued me). It’s a delectable mix of the Titanic, World War One, late 19th century, Harvard, and Shanghai. The history lover in me jumped with joy. 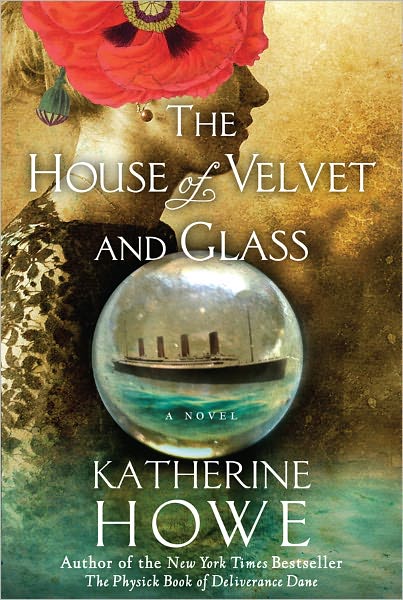 The book is in fact three stories going on at once, which would seem like it would be confusing, but Howe skillfully weaves the tales together, making sure that the three tales are equally important and not one overpower the others.

The story starts off at Helen Allston and her daughter, Eulah, on a voyage by ship. Both women are wealthy, as they are first class passengers. All is fun and happy, until at the end of the chapter, when Howe writes, “At the top of the menu, engraved in elegant, nautical letters, was written the name of the splendid ocean liner that was carrying them home: TITANIC.” In many ways, that’s the element that Howe uses throughout the book, weaving a web of intrigue and mystery, and telling you the answer at the end.

However, Helen and Eulah aren’t the main characters, but rather Sybil, daughter of Helen, older sister of Eulah. By society’s standards, she’s a spinster, too old to be married at 27. She’s trying to come to terms with her mother and sister’s deaths by going to seances, in an effort to contact the dead. Going to the seances is an escape for Sybil, a woman who has a taciturn father and a brother who’s expelled from Harvard because of a scandal.

Sybil reaches out to her friend, Professor Benton Derby, an acquaintance she shares a past with. Originally they work together to convince Sybil’s brother to return to school, but they discover that there’s something bigger.

The third story of the book is set in Shanghai, starting off in the International Settlement, in the late 19th century, and something happens there that causes the later events to happen. (I don’t want to go into details that much because it’s so much more fun to read the book.)

I was surprised at how accurate and detailed the settings were. It pulled me in and pardon the cliche, but I felt like I was in the Shanghai, on the Titanic, and in Boston. The acute feelings of being pulled in was due to Howe’s extensive research for the book, often reading primary sources at the National Archives, Harvard University Archives, the Smithsonian, and more.

But back to the Twilight thought, the reason why I bothered to such a pop culture reference was because as much as this book is ingrained in the happenings of the turn of the century, it is also ingrained the mystical and fantastical happenings that were part of the popular belief of the turn of the century, Spiritualism. Many novels portray Spiritualism as total quackery or as something so real that all believers can contact the dead. A House of Velvet and Glass  is between the two extremes, as it explores the possibility of both.

A House of Velvet and Glass first gave me a sense that it was, as a quote by Lyndsay Faye on the back of the book says, “an intricate and intimate family portrait”, but for me, it was more a story about life. There’s tragedy in the book no doubt, with the deaths of a mother and a daughter on the Titanic, the ending of the book brings up another question. Is it okay to have be true to yourself and dying, holding one big happiness or living an ordinary life where you aren’t true to yourself? With the latter, yes, you are alive, but is it worth it to spend the rest of yourself in unhappiness?

The book, A House of Velvet and Glass leaves a lot to think about and I hope you will read it too!