Over the weekend, I finally found the time to write the recap post for the Margaret Atwood event I went to. Last month, I had the chance to attend a lecture by Margaret Atwood and I’m finally writing about it now. The topic was about the undead- zombies, vampires, Frankenstein, etc.
The lecture was surprisingly funny and light-hearted, which was unexpected since she writes with a dark tone in her novels.
Below, I’ve shared some highlights.
The lecture started off with a shout-out to her Twitter followers and explained why she was attracted to zombies.

“…quite frankly, I immeasurably failed to grasp their charm. But others seemed to have grasped it, so an investigation, was in order. What was I missing?”

Some highlights:
On the apocalypse, divination with potatoes, and a solution for writers block:

“Last Christmas, I received a charming calendar put out by Cabinet magazine, dedicated to prediction and the end of the world. Here’s their pitch: ‘When the current cycle of the Mayan long count calendar concludes the 21st of December 2012, the world will end.’ Of course, this is hardly the first time the planet’s demise has been processed out. And so Cabinet offers you, doomed reader, to ‘abide to the brief time that remains.’

Among the methods of divination that are in the wall calendar are some you are familiar with, animal entrails, for instance, and some that cause me to wonder. Divination by… coffee grounds? We know about tea leaves but coffee? Then I came to potatomancy. Divination by potato.

The potatomancy photo shows very twisted potatoes with sticks stuck into them for legs. They made this up, I thought. Well, yes and no. On the web, the modern day version of consulting the oracle, I found two articles on potatomancy. The first, from Abrahadabra Forum, told me how to do potatomancy.
Select a blue potato. Move your knife around until the point of insertion… feels right. Cut the potato in two. Gaze into the potato slice and until you see a pattern. Dip it in dye if this helps. Interpret the pattern according to inspiration.

I don’t recommend you try this home but you may wish to. It may be a great cure for writer’s block. After days of gazing into a potato slice, return to your discouraging manuscript might begin to look attractive.“

On Macbeth and the interesting actor who played him:

more beneath the jump

“In the last scene, Macbeth boasts to Macduff, that he can never be defeated by a man or woman borned, the witches have told him so….

Then it’s all over for Macbeth. And his head. Which I once saw played by a cabbage…  The person … saw the cabbage tee tall and it was a bit squishy so she thought to replace it with a new one, which she did. Then it ended up squishing upon the stage and staying there. Macbeth’s head landed and bounced into the orchestra so be glad this didn’t happen to you.”

On hope and zombies:

“There’s always hope. It’s built-in. It’s catching. Where there is hope, there will be more hope because with hope, people make an effort, which is what we will have to make. So, maybe that’s the true meaning of zombies is that they are ourselves but without hope.“

Highlights from the Q&A:

“When I first started doing Q&A’s in the sixties, I got questions like ‘When are you going to kill yourself?’ I was a woman poet and it seemed to be required then. And ‘Is your hair really like that?’ and ‘Do you get it done?’  That really happened. My answer: ‘If I got it done, would I do this?’

“If you’re working to say something, you have to love it.”

The event also included a book signing event, which I was not aware of so I ended up getting Margaret Atwood’s signature in the notebook I was using to take notes in. 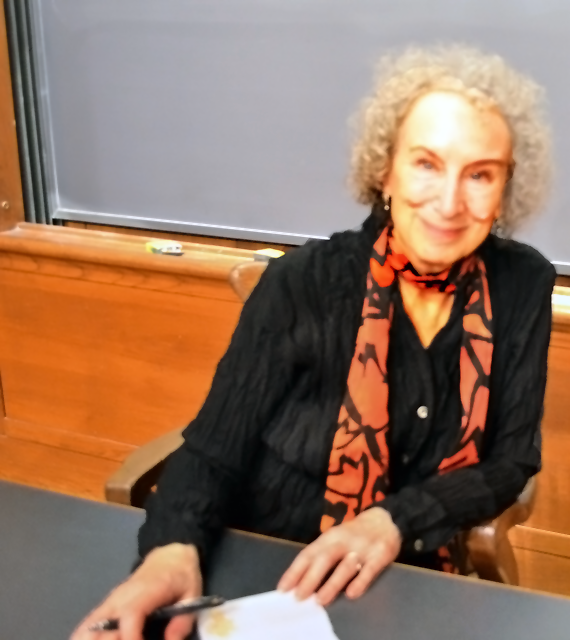