I’ve seen many people read Haruki Murakami’s works. The person behind me in science class read Murakami and I remember asking him if I could read the back of the book he was reading, Underground (or was it The Wind-up Bird Chronicle?) It didn’t at the time, but as I was searching for books in the book selves that makes the library, I decided to look for Haruki Murakami. The only book on the shelf was Murakami’s Norwegian Wood.

On the cover, there’s two solid purple circles on the cheeks on an image of a woman’s face, so blown up that the pixels are visible. The cover was interesting, no doubt, with the purple circles appearing to be blush marks on the woman’s face and the gaze of the woman looking at a distant and invisible object. So mellow. 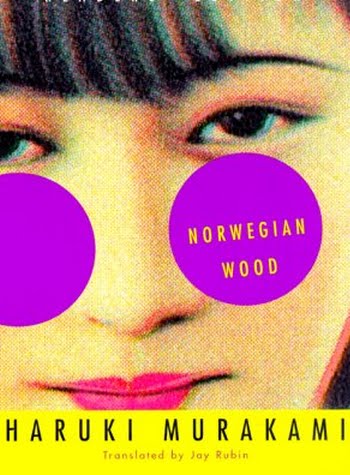 I was right. It was mellow and nostalgic. It’s very introspective and self-conscious. The synopsis given describes it as “stunning and elegiac”. It’s true.

The book centers around Toru, a quiet and serious college student and his relationship with Naoko, an introspective girl. They’re mutually bonded by the death of their friend, Kizuki. Kizuki was Naoko’s boyfriend and Toru’s best friend. Neither of them “get over” they’re friend’s suicide, Naoko more so than Toru. As Toru tries to get used to college life  and come to terms with his best friend’s death, Naoko appears to be dragged down by the chains of Kizuki’s death that happened years before.

Here is the story of different paths that two people decide to take after experiencing the same thing. Toru tries to come to terms while Naoko, trying to do the same, only sinks further into the abyss of grief.

Naoko’s personality is a type that I don’t really like in characters- weak, introspective and depressing. However, as I read, she endeared herself to me. Readers get a sense of who she is through Murakami’s writing even when Naoko is talking about Kizuki,” The problem was that that [sic] kind of thing couldn’t go on forever… Such perfect little circles are impossible to maintain. Kizuki knew it, and I knew it, and so did you. Am I right?” Readers know her fate, far before the end, and accepts it. She is a tragic chraracter, no doubt. In a way, she reminded me of the tragic women characters in Asian literature. There’s a character in The Dream of the Red Chambers, a classic Chinese story, who is weak, sickly but beautiful. Naoko and she are both tragic chracters, never really understanding death, but still making a impression on the reader.

Although the book is set in the sixties, the feeling of coming to age and dealing with grief are universal. That’s what struck was terribly genius, the transcending of the book over time. Murakami writes so eloquently about such a depressing subject, but the story is, in the end, a story full of hope and laughter.

Norwegian Wood is a rare novel that I spent reading in small doses. It’s better that way, a little each day, because of the writing and the way it draws the reader in.

Reader warning: This book is a story about a romantic coming of age and it’s listed under adult fiction/literature. Sex does play a role in the book.

—
After doing some research on Norwegian Wood, I found that a movie was released in 2010 based on the book in Japan. 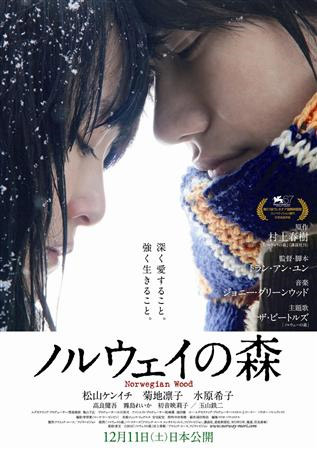 In addition, there is a English version of the book with the movie cover, which you can purchase on Amazon, here.