I started reading spy thrillers that were meant for boys in elementary school, when some famous author, whose name I cannot remember, came to my elementary school. He gave us a presentation that I think was about how he writes, but I can’t be sure. A few days later, my classroom had a bunch of his books, and I signed out two. One was about climbing Mount Everest and another was a spy thriller.
This spy thriller/mystery streak continued after that. I discovered Sherlock Holmes later that year and despite the disturbing factor that Sir Arthur Conan Doyle’s stories presented to my 9 year old brain, I read on. 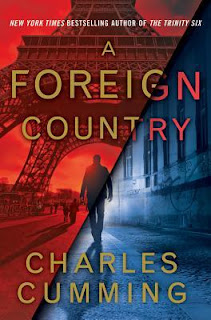 When school was still in session, St. Martin’s Press (which I found out was founded by Macmillan Publishing, but that’s another story for later) had sent me an ARC for A Foreign Country, by Charles Cumming. I can finally talk about it now, since the publication date is within a month.
The story is set in mostly in France, but it’s about the British M16, which piqued my interest. As the lover of English things, I quickly pushed my schedule aside to read the book.
The newly installed Chief of M16, the British version of the CIA, goes missing. It’s a problem because the Chief is the first female Chief of M16. The M16 hire a former M16 agent, Thomas Kell to investigate the disappearance. However, he soon learns that it’s not just about the disappearance of the Chief. There’s a web of intrigue that connects a grisly murder of an elderly murder in Egypt, the Chief’s disappearance, and an accountant’s kidnapping in Paris.
The book is fast-paced, and throws readers in for a loop in the middle of the story. It flows naturally, despite the wide web that is already thrown at the beginning of the story. If Charles Cumming was less of a talented writer, the story probably would have been a giant mess, struggling to connect all the pieces. The pieces of the puzzle connect together slowly, like a natural intrigue. No information is thrown too fast or too early.
The story isn’t so much mystery, though the synopsis provided by the publisher seems to make it seem so, as it is a thriller. A Foreign Country is definitely an adventure story, as readers want to follow Thomas Kell everywhere to be one step ahead of the enemy. In mysteries, a cast of characters are introduced and someone in that group is almost definitely the guilty one. The bad guy is foiled by the detective’s clever sleuthing and everything is all merry and happy.
The writing is okay, not too fancy or flowery, but then again, it’s a spy thriller. It’s not an analysis of the mindset of teenagers or women, or life. Readers read the book for the fast paced action, gorging on the language to move forward, to know more of Thomas Kell’s story.
After I finished the book, I opened it once again, to experience the 75 mph feeling of being a spy. A Foreign Country doesn’t paint a glamorous of a spy’s life, but rather a realistic one. Thomas Kell’s personal life is in shambles and his career is half dying. He gets no fancy gadgetry made by the in-house gadget maker. This makes the book all the more interesting.
A Foreign Countryis available for pre-order online and the publication date is August 7th 2012.
Review copy provided by St. Martin’s Press