New year, new goals, am I right? I’m always fascinated by career profiles, especially when they’re featuring women of color and the unique challenges that they’ve had to face so here’s a new series doing exactly that– stories about women of color. Here’s the first in “Tell Me More”.

Kristyn is an Emergency Medicine resident in Philadelphia. While it may seem like her life has been pretty straight forward, she’s had her fair share of challenges from her undergrad advisor telling her that she should find an alternate career, to the struggles of being a black female physician. I spoke to her late last year about what it’s like being a female in medicine as well as the importance of mentorship.

I went home from that meeting and just cried. It turned around to be a drive for me because it became “you told me I can’t do it, but I’ll find a way”.

I’ve never been a great standardized test taker but I’ve done pretty well in school so I always knew in the back of my head that I was going to struggle with the MCAT but I didn’t anticipate how much of a struggle it was going to be.

In high school, I was always in the honors classes and had a 4.0 GPA. I never knew what it was like to really struggle with school work. When I got to college, I didn’t do well in my science classes but I did well in the humanities. I knew I wasn’t competitive for medical school with C’s. I didn’t know what to do but I really liked my sociology classes so I switched to being a premed sociology major from biology pre-med. I think I had a 2.9 or a 3.0 in my premed classes and I talked to my advisor who said that I needed to find another career path. Basically, he said that I needed to give up the medicine thing because I wasn’t going to get into medical school. I wasn’t given any alternative careers either. I didn’t know about osteopathic medical schools, where admissions are more holistic, nor was I told to consider nursing or any other career in the medical field.

I went home from that meeting and just cried. It turned around to be a drive for me because it became “you told me I can’t do it, but I’ll find a way”. It was junior year and I tried the MCAT, but it didn’t go well.

I was a work-study student and at the time, working as a file-clerk for one of the physicians. Another physician, Dr. Sonja Harris-Haywood, put in a posting looking for a research assistant and I applied thinking that medical school is like research. I met with her and she’s the physician that gave me back the confidence about getting into medical school. It changed my life. She was part of the family medicine faculty at the medical school and she gave me a job, ten hours a week. At the initial meeting, I was so embarrassed because she made me write down the classes I took and the grades. She kept it real with me but she told me what I needed to do to get my grades to where they needed to be. It was health disparities research and I ended up working full time for her after graduating college. I looked into post-bacc programs but they didn’t work out. I ended up doing an informal post-bacc since I was an university employee so I got a certain amount of free credits a year. I retook some classes but they don’t look that highly on retaking classes and doing well so I also did some graduate classes like microbiology, where I did well.

Mentorship seemed to have played an important role in your life.

Yeah, that and family. My family was always supportive of me and they were supportive of whatever goals I had, whether it was medicine or not. Having mentorship though is so essential. When you come up with any obstacles or low thoughts, a mentor is someone who can help you find another road to the same destination. Unfortunately for a lot of women, especially women of color, a lot of us don’t have that and it could prevent us from reaching our goals. I think mentorship is so important but it can be so hard to find a mentor. I’ve been lucky in medical school where I had a mentor and I still reach out to some of my mentors. I’m still trying to find mentors for my current career path and it’s a lifelong thing.

Do you think physicians should be more honest about their struggles?

Yes but it’s hard. Medicine is filled with smart people and no one wants to admit they did poorly; it doesn’t feel good or look good. I wish people were more honest because it would help with the rates of physician burnout and suicide. People should have have open and honest conversations about the struggles they’re going through, because most likely, many other people are going through the same thing.

What is the best advice you’ve ever received?

This was something that an attending told me but it applies to life in general, and so other many things. “Every shift ends,” that was literally all he said. You can have a really bad shift where you have codes, people passing away and that’s hard emotionally, but that shift will end. You can think about that with everything. There are similar quotes– “life goes on”, “this too shall pass” and I think they’re all very true. Today will end. This day will end. This hour will end. Initially, it may not seem that way but you have to keep that in mind. A lot of the emotions that you’re going through, the struggles that you’re going through, it’s all momentary.

What do you wish women knew about being a female physician?

Practice saying “no” and “I’m actually the one running this” because people will try to talk over you often and it’s not only male physicians but also females. I think as women, you’re taught not to be assertive but being assertive is definitely a trait that you need to succeed.

I’ve been called a nurse, numerous times. Sometimes you’re mistaken for a tech, sometimes you’re called “ma’am” when everyone else in the room is called “doctor” with your team of males or colleagues who are not physicians of color. I had an incident where I was precepting a PA [Physician’s Assistant] student and I came in, introduced myself to the patient as the doctor. The patient kept only talking, directing questions and looking at the PA student, who was a young, white male. After telling the patient, “Sir, thank you for your story, I’m actually the physician who will be taking care of you and putting in your orders,” the patient apologized, but I think there are still assumptions and biases about what they think “doctor” entails.

I also wish women in general who want to go into the field know the amount of dedication and sacrifices that can arise. Medicine is a very demanding field– at minimum you have four years of undergrad, followed by four years of medical school unless you go into a combined undergrad-medical school program, then at least three to four years of residency before you’re a practicing physician. That’s a significant amount of time where one of your main priorities in life is school. Obviously, there are people who have families and get married during this period of time, as well as do other things that they want to do like run marathons, but in general, I think people need to realize the amount of time medical training truly is.

I’m actually a very passive person, which goes against the stereotype [of black females]. We’re seen as fairly aggressive. I do think that women in medicine do need to be assertive, not only because of gender differences but also to stand your ground during differences that come up, whether it’s during a group project or when you’re the team lead and someone’s coding. You do need to take on assertiveness and it’s important for women, especially, to develop their leadership skills throughout their careers and see what type of leader they are. Practice saying “no” and “I’m actually the one running this” because people will try to talk over you often and it’s not only male physicians but also females. I think as women, you’re taught not to be assertive but being assertive is definitely a trait that you need to succeed. 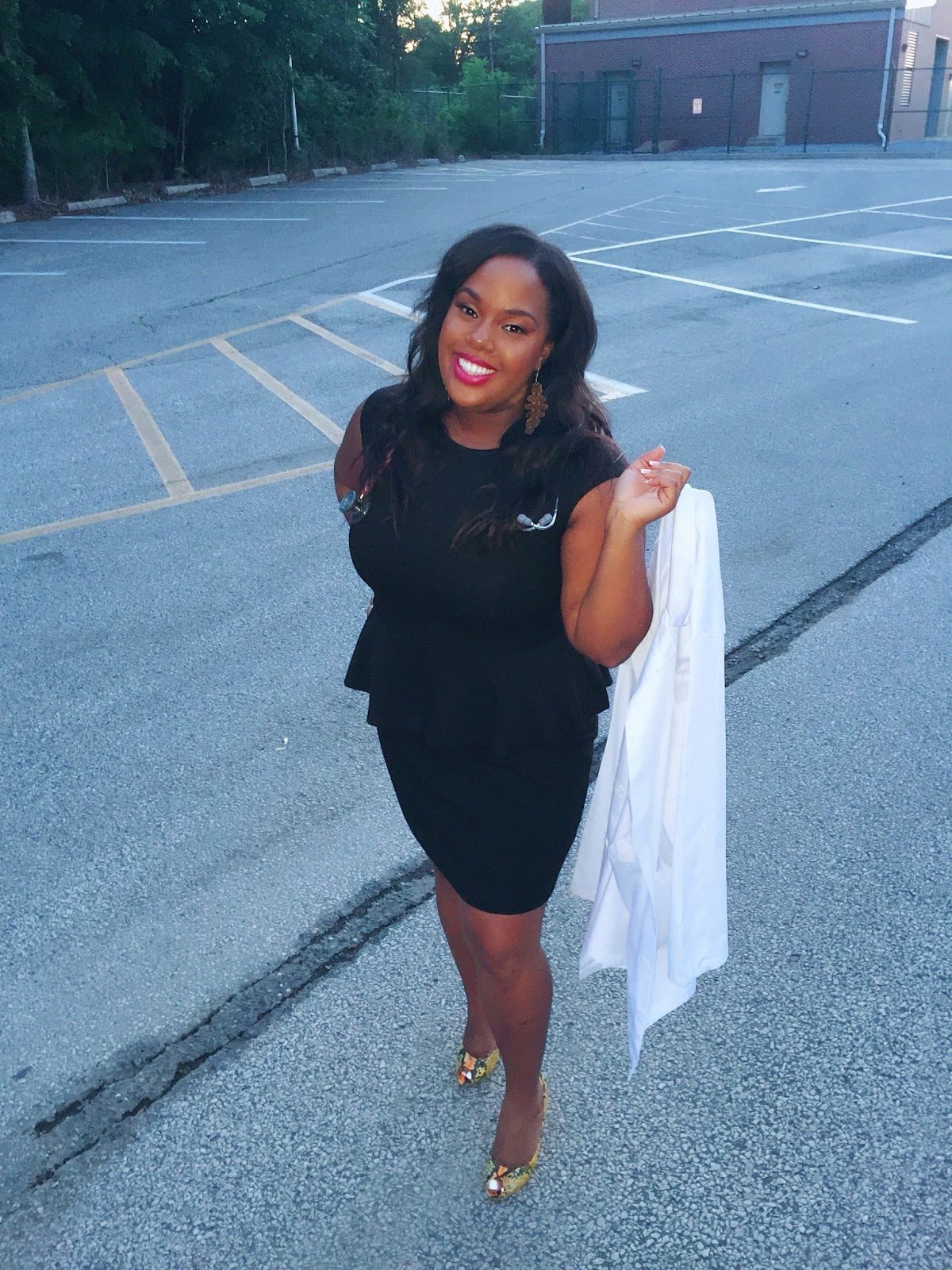 What does the word diversity mean to you and what do you think it should mean in the context of medicine?

Diversity in medicine needs to be reflective of the patient population. The US is only becoming more diverse, with more immigrants and people who are exploring their sexualities and gender identities. You look at a lot of academic centers and a lot aren’t reflective of the patient population. It’s hard though because it starts at the residency level, which goes back to the medical school level and ultimately, the college level.

What do you love most about being a woman of color in medicine?

I’m a second-year Emergency Medicine resident in an underserved area in Philly. The surrounding community is African American and so am I. It resonates with a lot of my patients and they tell me that they’re so proud of me or that they’re more comfortable when I’m around. I love that because there’s a connection where you can see someone who’s similar to you. I also love having a seat at the table and changing the face of medicine as a woman of color. That’s something that I take pride in. The different experience I’ve had as a woman of color is something that I can contribute and change patient care.

Where do you see yourself in five years?

Out of residency, for sure. Ideally, I’d like to move back down to the South. I’m still deciding if I want to do academic or community medicine but I hope to see myself happy and content with my choices. In some capacity, I want to be mentoring and helping minority students though I’m not sure in what capacity right now.

What’s your favorite thing to do on a day off?

Sleep, watch Netflix. Call family. I like watching “This is Us”, even though it makes me cry every time. “Black-ish” is good. I shouldn’t watch “Married to Medicine” but I do. Mindless TV in medical school and residency is good.

Who would you want to meet if you could meet anyone (dead or alive)?

I would want to meet and have dinner with the Obamas. I would want an honest conversation about the struggles they went through and how they maintained a solid family unit. What was it really like being the first multiracial president? How did they handle it with poise?

Interview edited for clarity and length.