I’ve always wanted to read Julie Otsuka’s work, and I’ve finally found the chance to. Last month, I had discovered that my local library had an e-book lending system. I placed among others, The Buddha in the Attic (winner of the 2012 Pen/ Faulkner award for fiction and National Book Award finalist) on hold.
Finally, the book came through and I downloaded the file onto my Nook. It’s a terribly short book, only about one hundred pages or so. Despite its length, it’s still such a powerful novel that touches on so much. 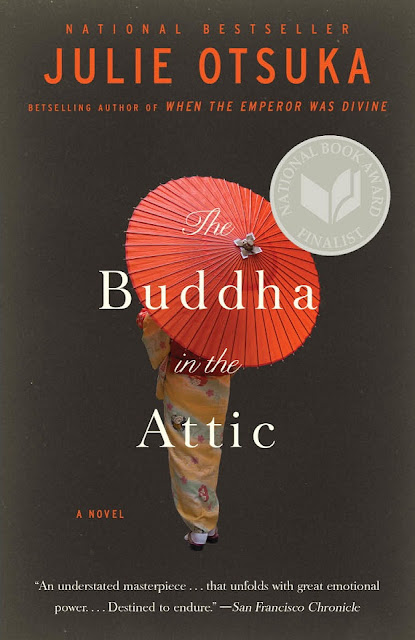 The novel is about the trials and obstacles of Japanese women in America during the pre-war era and World War II era. It begins with the voyage of Japanese women to America to become picture brides for the Japanese men that were in the U.S. When they arrive in the U.S, they discover that the lives that were painted for them in the letters that their husbands sent to them were a fantasy. They were destined to be farmer’s wives, the exact same fate they had left Japan for. However, life goes on and the women have children. Touching on the hardships of raising children in the US with knowledge of their heritage, the narrator says, “We told them [the children] stories about tongue-cut sparrows and grateful cranes and baby doves that always remembered to let their parents perch on the higher branch. We tried to teach them manners. Never point with their chopsticks. Never suck on your chopsticks. Never take the last piece of food from a plate. We praised them when they were kind to others but told them not to expect to be rewarded for their good deeds.”
The tone of the novel is so nostalgic and so sad, a painful longing for Japan and things lost, but everything is said in a matter of fact way, which makes the novel even more powerful. The writing isn’t fancy, but it’s so lulling and poetic that it blows my mind away. There’s definitely a poetic kind of feel to the book that makes the story so lyrical and gives it a vignette sort of quality. Readers know that it’s a real story, but it feels like everything’s happening far away, maybe on a flickering movie screen, or a dream.
Since the novel is set in the 1940’s mostly, the Japanese internment camps are mentioned. One by one, the men are plucked off, to places unknown, separated from their families. Letters come, neighbors look at the Japanese a little suspiciously, and soon, everyone is packing. The narrator says, “We walked the rows of our vineyards one last time with our husbands, who could not resist pulling up one last weed. We propped up sagging branches in our almond orchards. We checked for worms in our lettuce fields and scooped up handfuls of freshly turned black earth. We did last loads of wash in our laundries. We shuttered our groceries. We swept our floors. We packed our bags. We gathered up our children and from every town in every valley and every city up and down the coast, we left.” The sense of quiet submission is so heart-wrenching that the reader cannot feel a sense of empathy for the Japanese.
The most interesting thing about the novel is that when the Japanese leave for the internment camps, the narrator is switched to a presumably Caucasian narrator who talks about how the town feels without the Japanese. It’s a brilliant move by Julie Otsuka since we’ve heard so much about the feelings of the Japanese in internment camps, but not the lives of the people who were indirectly affected by the internment of Japanese Americans-the remaining townspeople.
I read The Buddha in the Attic in less than two hours, but the story and the prose will remain with me for so much longer. It’s such an wonderfully crafted book, despite it’s size. As they say, don’t judge people by their appearance. This is the same, because there’s so much within The Buddha in the Attic.