The latter part of 2013 and the early part of this year saw the launch of two great book blogging websites, Book Blogging and Literally App. While I love finding new websites and tools, I have a hard time maintaining all the social media and websites that I’m on along with blogging. 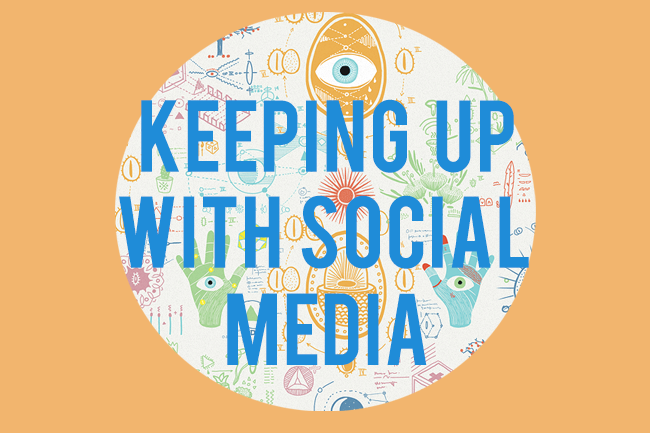 How do people do it all? Here are my ways of coping and attempting to be on top of things.
Blogging
I’ve talked about productivity before but in general, I try to have a week’s content done by the weekend and I schedule the posts throughout the week (Monday, Wednesday and Friday). I do graphics and posts all in a bunch, usually finishing the posts first and then doing the corresponding graphics afterwards in Photoshop.
While I do most of my blogging and writing over the weekend (sometimes on Friday afternoons and weekends), I come up with discussion ideas and wallpaper designs over the weekday, through little jotted post-its on my phone or in paper.
Still though, I’m not perfect and there are times where I don’t come up with posts or content. I try to not stress over it when that happens.
Twitter
I did a post about managing Twitter two years ago (has it really been that long ago?) and Twitter has changed since then. I still use Tweetdeck to manage my Twitter, but I’ve since added Twitter for mobile to do some quick tweeting and responding when I’m on the go. I still use Hootsuite occasionally, but I’ve changed over from using it on the computer to mainly using it on the go.
In general, I try to use Twitter for mobile during downtimes since I find that when I use it when I’m working, I get distracted easily.
My new favorite third-party Twitter app is Buffer, which is a web-based and mobile-based app. It’s great for sharing articles and spreading those tweets out. I find a lot of interesting articles and things online but I don’t want to spam people’s feeds with all my links at a time. Buffer’s great since it schedules the tweets out for you.
Tumblr
I’m not on it as much as I would like to be and in my opinion, using Tumblr as an extension of a blog takes up a lot more time than I would like it to take. When I do use it, I use Tumblr for mobile a good 90% of the time to find things to reblog and if it’s interesting enough, I’ll toggle the option to tweet the link out to Twitter, too (you have to connect your Twitter account with Tumblr first).
I’ve since started to use Tumblr to share my blog post snippets on, too, again  (I stopped doing it around a year ago) but I do those posts on my computer when I remember.
Goodreads, Book Blogging.net, Literally, etc
This is where I don’t know how to handle myself anymore. These are all separate accounts and websites, often with overlaps. Brittany from The Book Addict’s Guide did an interesting survey about book blogger’s social media accounts and usage and found that Goodreads came in second in social media account popularity for book bloggers, I’m going to have to admit that I’m lazier about Goodreads than I am with Tumblr. I used to be a Goodreads-holic around 7 years ago when it debuted and I had a crazy amount of free time on my hands, but I don’t find it that useful or entertaining as I once did.
I use Goodreads for mobile but I binge read a lot and I don’t really feel like jamming people’s feeds with all my updates at the same time. Someone help me, please.
I love Book Blogging.net, which is Ashley (Nose Graze)‘s side project. I think it’s a great way to connect with other bloggers on the technical side of things, but for me, once I’m done with blogging, making graphics, using Twitter, and reading through all my blog subscriptions on Feedly I forget about and often times, don’t have time for a lot of the other sites. Same thing with Literally.
While I do genuinely like all of these sites, I find that my usage ends up in a Z-formation, with interest and usage high early on and then drastically decreasing as time goes on.
I’m curious to see how you stay on top of your social media accounts. Do you? What do you use to help? Do you only use a couple of social media accounts?