Profanity is not okay on your blog Twitter. It brings to mind a bratty person, which is not at all attractive. Don’t use profanity in your conversations to others either. I remember seeing a blogger tweet to another blogger with profanity. It was probably the brattiest tweet I’ve ever seen. Don’t be that person.

In addition, be careful what you say to other people on Twitter. If one of your followers follows the person you’re tweeting to, the tweet is visible to that follower, too.

It puts your dashboard, interactions, DM (Direct Message) and your tweets all in one screen. 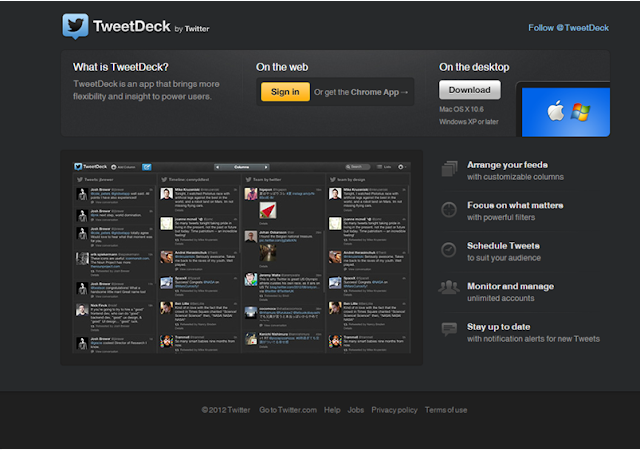 Tweetdeck is also really helpful with managing your blog. It allows users to create scheduled posts. I write tweets alerting my followers that I’ve written a new post (ie. a blurb and the post link (generated in the Permalink section of Blogger, when you’re writing a new post) and schedule it after the post goes live.

In addition, Tweetdeck allows users to create a column for lists, which is helpful. I use Twitter’s list tool to organize the people who I follow (ie. bloggers, publishers, writers, etc.) In Tweetdeck, I just create another column (select “list” and then what list you want to use).

The reason why I love Tweetdeck so much is because everything is on one screen. I don’t have to go back and forth between tabs to reply to conversations and tweet. It makes Twitter so much easier to handle. In addition, Tweetdeck doesn’t show your follower count which I like. I’m not that into stats, but with Twitter’s format of telling you how many followers you have every time you write a tweet, it’s possible to get too OCD about follower count.

Tweetdeck is also avaliable as an app for Google Chrome.

I recently signed up for it, but the layout is a little too clunky for my taste. It’s really complicated and I’m in the midst of figuring out how to use it.

I have Twitter and Tumblr accounts, which sometimes gets a little frustrating to manage. I can manage it in one screen from Hootsuite, but at the moment, I’m not. Hootsuite’s a little too confusing for my liking at the moment.