Netgalley sent me an email highlighting Mitch Albom’s newest book, Time Keeper and I readily requested the book. It was only when I opened the file on my Nook that I recalled why his name sounded so familiar. Oh, he was the author of The Five People You Meet in Heaven.
I vaguely recall someone reading that in middle school (It’s an adult book, I do believe) and the name of the book stuck, storing itself in the back lodges of my brain. It was always on my TBR list, but after the years, my TBR list was eradicated and rebuilt, again and again, and again. 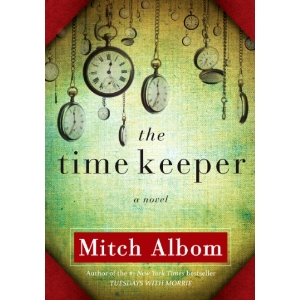 Time Keeper is the story of a man, Father Time, who is punished (or is he blessed?) to live in a cave, never aging, to repent for the creation of time. Before humans had deemed the man “Father Time”, the Father Time was a normal man, who had a name and a family. Then, he created time.  Life became about time. Time, time, time. More time, less time. Needless to say, Father Time was punished and banished to the cave.
The writing for Time Keeper is absolutely beautiful and haunting, with simple language (“This is a story about the meaning of time and it begins long ago, at the dawn of man’s history, with a barefoot boy running up a hillside. Ahead of his is a barefoot girl. He is trying to catch her.”) that is so powerful.  The simplicity of the book combined with the plot just blows my mind away. Mitch Albom doesn’t spend copious amounts of words on description but even so, I could paint an image in my mind of all the characters.
It’s the story of a man who played such an important part in the culture of humans however in the end, he’s just another human. The book captured life so clearly and brilliantly that I wanted to hold my Nook and hug it. Albom not only captures the ups and downs of a girl in the midst of growing up and pains of an old man aging but also the pace at which our world flies. I’m a stringent planner of my time (I have schedules) and Time Keeper forced me to realize how much our life is based on time. Time is of essence. Time. Time. Time. Throughout the times (pardon the pun) there is eternal hope for more time.
God plays some-what of an role in this story however it’s not in an zealous religious kind of way, but an all-watching being kind of way. I wasn’t bothered at all by it because if God wasn’t a part of the story, there wouldn’t be a premise for the story.
Halfway through the novel, I knew what the ending was. I just knew and despite it, I read on because I wanted to read Albom’s words about time and savor the beauty of the book. It’s a profound book about life, growing up, growing old and more. I couldn’t put it down.
Readers finish Time Keeper with an urge to discover the true meaning of life for themselves, hopefully detaching themselves from the idea of “time”, which, in the end, is just a collection of numbers and set measurements. It’s a wonderful book.
Review copy provided by the publisher via Netgalley