When I first read the title of the book, Painter of Silence on Netgalley, I had thought, “How poetic”. It turns out, I was thinking too much about the title because the book is about an artist who’s mute. Thus, a painter who’s silent. 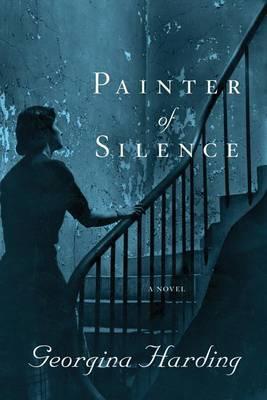 Painter of Silence,  is less about art itself than it is about life. It’s the end of the war, in late 1940’s and a nurse, cares for a mysterious young man who’s deaf and mute and without a background. She tells him her thoughts and secrets, more for her sake than the young man’s. After all, he can’t hear her. The urse names him Ioan, a harmless name, she thinks.
Another nurse, Safta, knows the young man’s real name isn’t Ioan. She knows because she’s known the young man when she was little. However, she still calls him Ioan. The war, though over, still lingers in the hearts of the Romanians. Safta says, “Perhaps there are things about themselves also that they would prefer not to be known. Who they used to be. What they think. What memories they carry in their heads.”
Despite this, Safta manages to reminisce about the past, who she was and how life was before the  tar, the innocence that pervaded life. The life without a constant stench of death and suspicion. Safta remembers the way things were, the comfort of life.
Told in small vignettes of the past, Painter of Silence is a soft but powerful novel not only about what war does to people and a country but also nostalgia that one feels when looking back at the past. The descriptions are simple (“The house at Poiana was imposing at first glance. There was its whiteness, the long neoclassical front, the pedimented porch and ranks of green-shuttered windows.”) but don’t fail to make an impression. The snippets reveal information little by little and the reader, like a child eating candy, wants more.
Painter of Silenceexplores the pathos of growing up, the sense of lost love, and the tragedy of war. Safta recalls the summer that she fell deeply in love and subsequent days after realizing that she lost that love. Even ten years after, she’s never truly over it. She tells herself that she’s over it, but only when she finds out what happened, is she truly over it. Safta remembers the happy days of the childhood, before war was around them and the differences are glaringly apparent to the reader. The trust that was placed in others, the wealth and the lack of longing.
Though the starts off about the deaf and mute young man who likes to draw, Painter of Silence is more about Safta. It’s about her coming to terms with the past and understanding what happened then.
Painter of Silence is such a well written book about Romania in the 1940’s. As I am not Romanian, I vouch for the facts, but the writing made me feel that I was in Romania in that time. It was only halfway through the novel when I realized that the writer was British. That only happened because I wanted to see the author’s name. Georgina Harding, the author of Painter of Silence, made the story feel so real. Perhaps it’s because in the end, stories about nostalgia for the way things were are all with the same emotions, no matter in what culture. That’s what made Painter of Silence so alluring, that despite the fact that I have no clue about Romania, I could still connect with the novel.
Safta says of her thoughts about returning home, “These things that I saw could not happened there, I told myself, as if the place was held in some capsule untouched by the war. And gradually I put the capsule away, perhaps because I could not risk it being broken. If I thought of Poiana at all, it must be just as it was, as when I’d been away at the college, and I came back and though some of the people had gone the place was just the same as if it had been waiting for me.” These sentiments are universal, no matter what background the reader comes from.
I’m quite thankful that I read Painter of Silence and it’s definitely a must read for the fall.
Review copy provided by the publisher via Netgalley
P.S Painter of Silence was originally published in the U.K earlier this year. It will be released on Tuesday, September 18th.